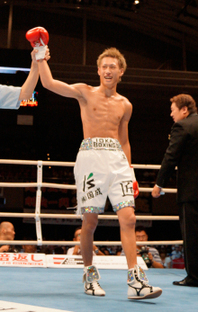 Courtesy of http://ameblo.jp/ioka/
When we talk about great boxing's stables in Japan the first ones that spring to mind are typically Teiken, the biggest Japanese promoter who promotes Shinsuke Yamanaka, Watanabe, a major promoter who current control Takashi Uchiyama and Kohei Kono, and the legendary Kyoei who have taken fighters like Yoko Gushiken and Yuri Arbachakov to world titles.

Today however the world has moved on and we've seen the real emergence of two newer, younger gyms. One is the Ohashi gym founded by Hideyuki Ohashi whilst the other is the Ioka gym, spearheaded by Hiroki Ioka. The two gyms, although rivals, both appear to have the same philosophy of developing young talent and pushing their fighters fast and hard. They seem to realise that some young fighters really don't need to spend years developing their talent and instead need pushing.

Another fighter of that ilk is Ioka gym's Sho Ishida (22-0, 11) [石田 匠] who has swiftly become one of the Japanese fighters that every fan should be keeping an eye on, even if he's not viewed as being one of the top 2 or 3 guys at the Ioka Gym.

On debut the then 17 year old Ishida made an immediate impact stopping Thailand's Taweesak Petchteerapong in just 160 seconds. Although it had been a short introduction to professional boxing it had been one that left an impact and show that the youngster had clear potential and talent.