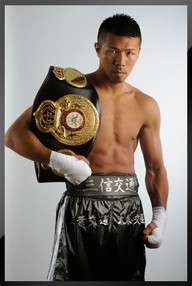 Courtesy of Watanabe gym
A lot of fans in the West typically think that Japanese boxers are "weak" and need to rely on speed to get to the top of the sport. Whilst international fans are more than happy to applaud the technical aspects of Japanese fighters few are thought of as powerhouses. One man who buckles that trend however is WBA Super Featherweight champion Takashi Uchiyama (24-1-1, 20) [内山 高志] who is among the hard hitters pound-for-pound in the sport today.

The 36 year old Uchiyama is currently considered as the premier fighter in the Super Featherweight division and whilst he is best known for his thunderous power he's actually a very complete fight with a solid amateur pedigree, very well schooled skills and the all the tools and credentials to be considered on the fringes of the pound-for-pound lists.

Before turning professional in 2005 Uchiyama had run up a spectacular amateur record of 91-22 (59) including 4 notable amateur titles, including 3 successive All Japan Japanese Lightweight titles. Although he wasn't a global star like some amateur fighters he did manage to compete at the 2003 World Championships in Bangkok (losing to eventual Bronze medal winner Gyula Kate).

Upon turning professional Uchiyama's power was scary. On his debut in the paid ranks he needed just 35 seconds to stop Chandet Sithramkamhaeng and his following 2 opponents also failed to make it beyond the opening round as the destructive power was simply too much.

In Uchiyama's first major test he out pointed Tomoya Endo over 8 rounds, it was his fourth bout and the first to see Uchiyama extended beyond the first round. Despite being dragged into a distance fight Uchiyama relied on his boxing ability and claimed a clear decision. Just a few bouts later Uchiyama would claim his first professional title stopping experienced Australian Nedal Hussein for the OPBF Super Featherweight title. It was the bout against Hussein that helped launch Uchiyama up the WBA rankings and into contention for a world title fight, though he was still inexperienced and needed more seasoning before then.