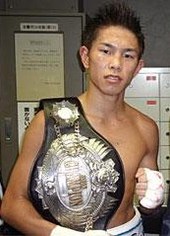 Courtesy of boxrec.com
When we talk about the new generation of fighters internationally we often hear boxing fans talking about Mexican Saul "Canelo" Alvarez and American Adrien "The Problem" Broner, who both lost in 2013. One man whose name certainly belongs in the conversation of "the best of the new generation" is Japanese youngster Kazuto Ioka (20-1, 12) [井岡一翔] a man who has fewer fights than the other two names mentioned but has already achieved more.

The 25 year old Ioka has followed in the footsteps of his uncle Hiroki Ioka, a man who won both the WBC Minimumweight and WBA Light Flyweight titles in the 1980's and 1990's both titles that the young Ioka has gone on to claim. Though there was always the expectation of the young Kazuto going a very long way in the sport.

Ioka's potential was spotted at a young age in the amateurs his talented proved to be something special. Not only did the youngster run up an eye opening record of 95-10 (64) after he started fighting aged 13 but he also picked up numerous titles nationally at a young age.

As well as Ioka's national success in the unpaid ranks the young Japanese fighter also started fighting internationally and actually competed at the 2008 Kings Cup (where he reached the Semi final losing to the highly talented Amnat Ruanroeng). Though it appears that Ioka failed to claim any major international crown despite his obvious talents.

Just weeks after Ioka's 20th birthday he made his professional debut and stopped the experienced Thai Thongthailek Sor Tanapinyo in just 3 rounds. Within a year Ioka had raced out to 3-0 (2) including a notable victory over former world title contender Takashi Kunishige. It should have been clear from the moment that Ioka beat Kunishige that we were talking about a special talent though many outside of Japan were sleeping on Ioka who they didn't really know about about at the time.