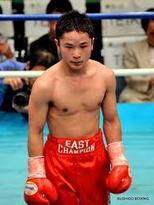 Aged just 24 Hara has been tipped for the top by many since his days in the unpaid ranks where he proved to be a sensational fighter. In fact in his 38 bouts as an amateur Hara won 36 (18 by stoppage) as he claimed various national titles and proved to be a talented prodigy.

In February 2010 Hara began his professional career, aged just 19 and swiftly stopped Thai Wittaya Sithsaithong who lasted just 161 seconds. It was obvious from his debut fight that Hara was quick, unexpectedly powerful and very highly skilled though his Thai opponent had, admittedly, been limited.

Before the end of 2010 Hara had raced out to 5-0 (3) and had claimed the highly regarded All Japan Rookie of the Year. Despite still just being a baby in terms of being a professional boxer, Hara had already defeated 2 unbeaten opponents in the shape of Ken Agena, then 4-0, who was beaten in a 4 round, and Shuhei Ito, then 9-0, who was stopped in 5 rounds. The win in the Rookie of the Year had really Hara grab the attention of the Japanese boxing public.