The female side of boxing 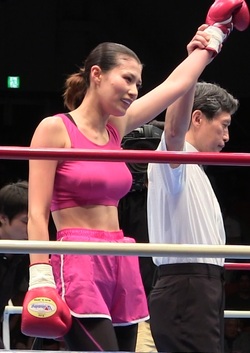 Courtesy of Wikimedia Commons
If there is one side of boxing that is growing at an alarming rate it's female boxing. Whilst opinions amongst fans are split it's fair to say that it's ever more professional and long gone are the days of two untrained fighters putting on the gloves for a bout.

Right now the leading countries in female boxing are Mexico and Argentina though in third place seems to be Japan who have really got a solid selection of top females. As well as Japan both South Korea and Thailand have also started developing some interesting and talented fighters who have began to make a mark on the world stage.

With the growth of female boxing, especially in the East, we've come to the idea of a new section on Asianboxing. The female boxing section.

In here we will look at the top upcoming fights involving women, the results of every female bout involving an Asian fighter and even profiles of some of the female fighters who are either world ranked or forging their career in the sport.

As is always these bouts will be included in our main results and schedule part of the site, though now we will be looking at the key bouts in much more detail than we had previously. The previews, whilst not as in depth as the world title previews, should help fight fans learn something about both fighters and hopefully introduce some more fans to female boxing.