Over the last few years Japanese boxing has grown in the way it's distributed content. There is still televised fights through terrestrial television, think TBS and Fuji TV for example, and through Satellite TV, for example Fuji BS, WOWOW and G+. There has also been a move towards online distribution of fights that aren't being televised.

​The online distribution model is one we've seen take a hold in the US in the last few months with the DAZN and ESPN+ both now key player in the American boxing scene. They however aren't the first online distributors of boxing content online, and they surely won't be the last.

One major player in this field is Japan's "Boxing Raise" service. A service that has been around for a few years now, and whilst we have mentioned it quite a bit it seems like we haven't ever really explained, in detail what it is, who can get it, and what it does. People tend to be aware it shows Japanese fights, but aren't totally aware whether they can get it, or what it really contains.

​Firstly what is Boxing Raise?
Boxing Raise is a Japanese subscription service run by the people behind the Dangan cards. The service provides a huge library of content on a Video on Demand (VOD) basis, including a huge back catalogue which allows fight fans to watch the development of fighters. As well as having a VOD service users also get the occasional live show, which seems to be around 1 month now.

There's a usually 2 or 3 Dangan cards a month, sometimes more, meaning there is always fresh content in the VOD section, and with the live cards the only way to watch them is through the Boxing Raise service.

Another subscription?
Yes, Dangan is indeed another subscription service. Costing ¥980 a month, which is around £7 or $9. With ESPN+ and DAZN showing a lot more contest than Boxing Raise this may not be a great investment for fans wanting live contest, but with such a huge VOD library there is certainly a good reason to look into, or trialing the service.

Where do I find Boxing Raise?
To access Boxing Raise you need to go on their website, https://boxingraise.com 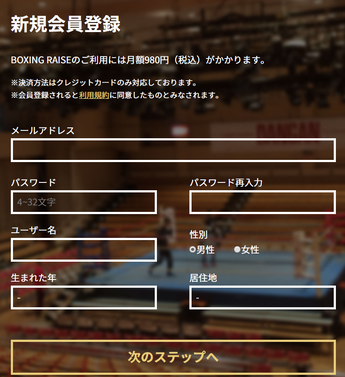 Is it available where I am?
​YES! Although not officially available outside of Japan there is no geo-locking for Boxing Raise and it does seem like Dangan are aware that there is a small international audience using their service. This may change in the future, but for now all you need to do to sign up is through the sign up page, and provide card details for the service to take payments.
​
The sign up page, which can be accessed here, is in Japanese so if that's not a language you understand we would suggest using Google chrome and the inbuilt translator.

If you can't use a translator the fields needed to fill in on this page are:
Email address (at the top)
Password and re-enter password (on the second line)
Username, and gender selection (on the third line)
Year of Birth and Residence (on the 4th line)

As mentioned this isn't region locked, so your "residence" selection doesn't actually matter to setting up an account, and appears to be there more for a data collection purpose, though we've never received any marketing e-mails or anything in regards to location.

The yellow bar is the "Next Step" button. 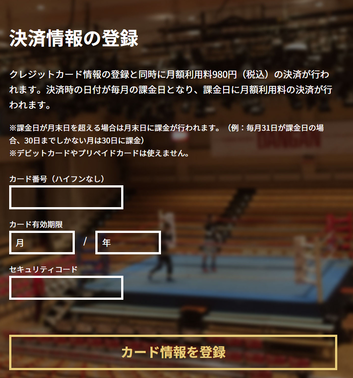 After clicking the next step you will be asked for your card details, to make the monthly payments.

​As with the registration screen we do advise using a translator but if you can't, the top line is asking for the card number (typically a 16 digit number), the expiration date, with the month on the left and the year on the right, and the security code on the bottom, a 3 digit number from the back of your bank card.

Certain card, such as prepaid cards, aren't accepted, which is one of the messages above the boxes, and the the other note is that the billing date will be taken on the 30th day of the month, if you register on the 31st day of a month.

Also, as obvious as this is, remember your login details, because you'll need those to login into service their login page, which is here. 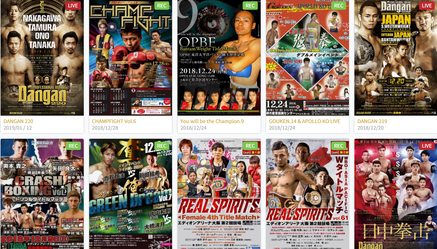 Should I subscribe?
We can't tell you what you should and shouldn't do. We would however advise that if you're really wanting to get into the Japanese scene, see the fighters develop and see some really good fighters in the early stages of their career, it's worth subscribing to the service.

​The depth of content is genuinely huge, and growing all the time. We've taken a snapshot of the shows on the service, and the 10 here all took place no earlier than November 28th.

We know that for the average boxing fan another subscription service isn't worth the effort and time, so this is a niche product, but if you're a hardcore fan of the Japanese scene this is a service that fills in holes left by Japanese TV channels. It covers a lot of domestic cards, gives a chance to see a multitude of JBC, OPBF, JBC Youth and female world title fights. It opens the door to watching prospects that aren't getting TV time and delivered some of the best Japanese bouts of 2017, 2017 and 2018 and we suspect more fantastic fights will be delivered in 2019!

Is there any problems?
At the moment there are still some issues with the VOD section and certain operating systems. Due to that we suggest that anyone wanting to use the service looks at the free content the site offers and see if it works on their device(s), though they have certainly upgraded their video player since the service began.

Also quite often the website doesn't give much warning in regards to what they are showing live, so you do need to keep an eye out for that. It would be amazing if they added a future schedule in later this year, something we do expect to see. Also, as we know our readers are English, it would be nice if they include an English language option, though with the site not officially available outside of Japan it does seem unlikely that this will happen.

If there's anything you want adding to this we're happy to add an FAQ to this page. Please send all questions to either asianboxing@asianboxing.info or get in touch via twitter, @asianboxing