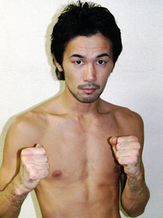 Courtesy of boxrec.com
One of the best fighters in Japan, if not the world, right now is current WBC Bantamweight champion Shinsuke Yamanaka (25-0-2, 17) [山中慎介] a southpaw who has really exploded on to the scene in the last few years with his power, toughness and skill.

Born in October 1982 in Konan, Shiga, Yamanaka has become one of Japan's boxing stars under the guidance of the legendary Teiken Gym which has helped guide him to a world title.

Yamanaka was first interested in boxing having seen the likes of Joichiro Tatsuyoshi on television. Tatsuyoshi, for those who aren't aware, was an insanely popular fighter in Japan in the 1990's. This interesting later lead to Yamanaka beginning to box himself.

As an amateur Yamanaka recorded a pretty average record of 34 wins against 13 losses which had included a victory over Takahiro Ao (who would twice go on to claim WBC world titles) but lacked any success of note on the international stage.

In 2006 the then 23 year old Yamanaka made his professional debut and defeated Hitoshi Takahashi via a 6 round decision. The decision was a very good victory for Yamanaka who won every round of the 6 round bout against a much more experienced opponent.