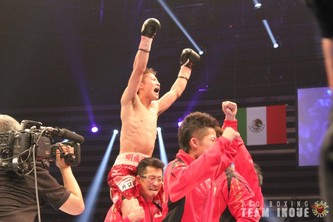 Throughout the history of Japanese boxing the most promising youngsters have been matched hard as they attempt to reach the top quickly. Fighters like Satoshi Shingaki, Kazuto Ioka and Tatsuyoshi Joichiro have all fought for (and won) world titles in their first 10 bouts. The idea seems foreign to many western fans who have seen fighters rack up 20 or 30 wins before fighting someone of note though it helps keep boxing in Japan so exciting to follow, you just know when there is a top prospect out there they won't be protected for years.

One fighter who is followed in that trend of being fast tracked to the top is youngster Naoya Inoue (10-0, 8) [井上 尚弥] who is widely tipped as  the most promising boxer in a generation.

Aged just 19 when he turned professional Inoue was immediately tipped as a world champion in the making and seemed blessed with all the qualities any fighter could wish to posses. From his debut it was clear that he had solid fundamentals, great power, incredible speed, a brilliant boxing brain and almost innate ability to pick the right shot at the right time. As we all know all those qualities are incredibly rare, and to see them all in one fighter is almost unheard of, especially one as inexperience and young as Inoue was when he first showed those traits.

A big part of Inoue's promise comes from his amazing amateur pedigree that saw him running up 75 wins against 6 losses with an excellent 48KO's. This included victories not only nationally but also in major international tournaments. As a Junior Inoue competed at the 2010 Asian Youth Championships (where Inoue reached the Semi Final) and the 2010 Youth World Championships (where he reached the last 16). The as a Senior he showed his class in even more impressive fashion winning the 2011 President's Cup, reaching the last 16 of the 2011 World Amateur Championships and losing in the final of the 2012 Asian Olympic Qualifiers.

Whilst some fans may ask "where were the major international tournament wins?" Those same fans need to realise that amateur boxing in Japan isn't the same as it is elsewhere and very few Japanese amateurs have major international success. Inoue's lack of Olympic and World Amateur gold medals were partly the fact Japanese amateurs don't have great success and partly due to the fact he was so young when he turned professional. Had he remained amateur until 2016 there is every chance that he could have claimed a medal in either the 2016 Rio Olympics or the 2013 AIBA World Boxing Championships in Almaty. Instead of continuing as an amateur Inoue turned professional signing with the Ohashi boxing Gym.