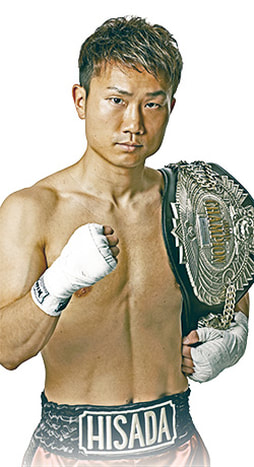 The current scene at Light Flyweight is one with a lot of young talent, such as Ken Shiro, Carlos Canizales, Edward Heno, Rey Loreto and Hiroto Kyoguchi. One of the few older fighters towards of the top of the division is 33 year old Japanese veteran Tetsuya Hisada (32-9-2, 19) [久田哲也], who hasn't got the most outstanding of records but is currently going through an impressive run and is one of the leading contenders in the division. He's one of the few fighters in the division who has really come through the ranks the hard way, and gradually made a name in the sport, rather than being set on the fast track thanks to an impressive amateur background.

The Osakan fighter was born on October 30th 1984 made his debut way back in 2003, as an 19 year old. Since his debut has had a lot of ups and downs, and on more than one occasion has considered walking away from the sport. Despite the bumpy ride Hisada's hard career has certainly been an interesting one, and it's one that has helped him become the fighter he is today.

On debut things began perfectly for him, stopping Shogo Obata in the opening round. Sadly for Hisada he would suffer his first career set back in his very next fight, losing a split decision to Takeshi Honda. The down was just a temporary blip for Hisada however and less than 3 months later he had notched his first decision win, defeating Yusuke Kondo. Sadly though he wouldn't be able to build on that win very quickly and it would be 11 months before he would fight again, upsetting the then 6-0 Yasushi Matsushita with a 2nd round KO win, marking his return in style.

Having put a couple of wins together Hisada's career would then his it's second snag, with the Osakan losing to the then 5-0 Yuki Nasu in July 2005. It was a short term set back, with Hisada scoring his next win just 5 months later, but it was another defeat in the very early stages of his career, dropping his record to 3-2 (2).

As mentioned Hisada would return form the loss to Nasu with a win, defeating Takashi Morishima over 4 rounds, and then he'd move into 6 round bouts defeating Yoshio Hayano with a 4th round TKO. Again things were looking up, only to hit a wall as Hisada was unable to over-come Takuya Yamada, with Yamada claiming a 6 round split decision over the then 21 year old.

Having lost 3 of his first 8 bouts Hisada was going to need some luck if he was going to begin to carve out a career. That luck came just a few weeks later when he got the decision in a very close bout against Junpei Horie in October, before repeating the feat in November. Those two wins proved that Hisada was improving and in May 2007 he took part in his first 8 round bout, beating Yuki Takemoto in another close bout.

​On August 19th 2007 Hisada was forced to taste defeat for the 4th time as a professional, losing a split decision over 8 rounds to Takuto Nanba. The fight, fought at Super Flyweight, was a razor thin loss and had it been in Osaka, instead of Kobe, it's to imagine Nanba getting the decision that he got. That loss seemed to really spur something in Hisada who seemed to find himself soon afterwards and reeled off an excellent 10 fight winning run. That run saw Hisada begin to really settle as an 8 round fighter, whilst dipping his toes into an occasional bout scheduled for 10.