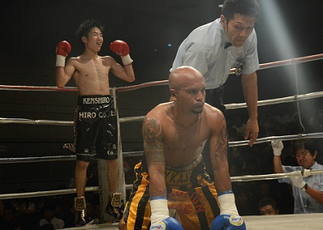 At the moment it's fair to say Japanese boxing is bustling with highly skilled, fast rising and young fighters. The most notable name there is obvious Naoya Inoue who is a 2-weight world champion in just 8 fights, then you have Kosei Tanaka who is set to fight for a world title in his 5th professional bout and you also have the much talked about Takuma Inoue, Naoya's younger brother, who looks set to become a world champion sooner rather than later.

Another name to add to that list of “super prospects” is Ken Shiro (7-0, 4) [拳 四朗], a 24 year old who looks like an incredibly special fighter who claimed his first two titles in 2015. And from what we've seen the odds are that he'll end up winning a number of belts before his promising career comes to a close.

Having seen his father's success it was little wonder that the young Ken Shiro took boxing like a duck to water and between 2007 and 2014 he ran up a very impressive amateur record of 58-16 (20). Not was his amateur record impressive but so to were his amateur achievements which included a championship win at the 2013 Japanese National Athletic Meet, a runner's up position at the Japanese National Championships, also in 2013, and a runners up place at a 2012 international tournament in Taipei, Taiwan.