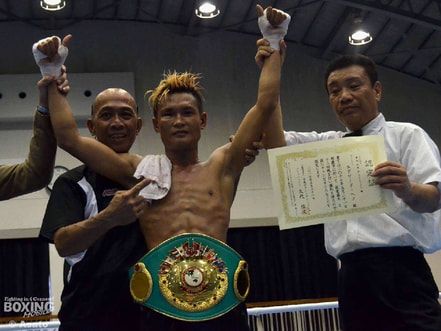 The Filipino scene at Light Flyweight is scary with the amount of depth and talent there. The division, probably the strongest globally in the sport right now, not only has recognisable world class fighters like Rey Loreto, Jonathan Taconing, Randy Petalcorin and Merlito Sabillo but also a host of rising prospects. These include the likes of Christian Araneta, Jess Espinas, Mark Vicelles and Mark Steven Ragoro.

Potentially the best of the bunch right now is 25 year old Edward Heno (13-0-5, 5), who has edged his way closer and closer to a world title fight over the last few years, despite a very inauspicious start to his professional career. He has really emerged on the scene as a potential world champion over the last 2 years or so, and is a very long way removed from the fighter who debuted back in May 2011 as an 18 year old kid.

Heno, like many Filipino fighters, took up the sport for money and like many didn't have a particularly strong amateur background. That's not to say he hadn't fought as an amateur, but his bouts really were just on the local scene with no major honours to speak of. Despite the lack of amateur gold he had hunger and drive, and often that can be the key to a fighters success.

On debut, in May 2011, Heno fought the then 1-0 Jomar Acedera, fighting to a majority draw in Binan City. Heno would fight again 4 months later and draw with another 1-0 fighter, this time Michael Enriquez. Although neither man was well known at the time it is interesting to note that since that bout Heno has become a leading contender at Light Flyweight whilst Enriquez has given fits to the likes of Jake Bornea, Rex Tso and Stamp Kiatniwat. Bizarrely Heno's third bout, against the then 0-2 Ruben Traza, also ended in a majority draw, leaving Heno with an incredibly strange looking 0-0-3 record.

Despite being unbeaten in his first 3 bouts Heno's career hadn't gotten off to a great start and it would be over a year before he would return to the ring. Thank his wait to fight was worth it as he picked up his first win, taking a decision over Julius Bala in and up down 4 rounder that saw both men being dropped. Less than 3 months later he would secure his second win, defeating Jessie Caballes over 6 rounds to move to 2-0-3.