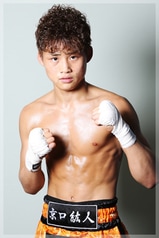 Starting 2016 the Watanabe Gym looked like being one of the biggest Japanese players in the sport. They had the man recognised as the top Super Featherweight on the planet and also held world champions at Super Flyweight and Light Flyweight, they also had a string of other notable names a unified Japanese and OPBF champion. The year however was a frustrating one for the gym who saw many of their top names suffer set backs, with losses for the likes of Takashi Uchiyama, Kohei Kono, Ayaka Miyao, Akio Shibata, Hayato Kimura, Ryuichi Funai and Kayoko Ebata.

For some gyms that sort of run would be the start of the end, for the Watanabe gym however it was a transitional year that saw them snap up a number of top Japanese amateur talents and push on with the development of other fighters. Rather than worrying too much about the setbacks they began to look towards the future and signed the likes of Motoki Osanai, Masataka Taniguchi, Chaoz Minowa and Hiroto Kyoguchi.

Of those 4 fighters the one that has impressed us the most is the exciting 23 year old Hiroto Kyoguchi (5-0, 5) [京口纮人], who already looks like a man we should all be ear marking as a future world champion, and as one of the future star of the Watanabe gym.

Kyoguchi first made a name for himself in the amateur ranks where he ran up a 52-14 (8) record. Not only did he have an impressive record but he also captained the boxing team at the Osaka University of Commerce, competed internationally at the International Invitational Tournament in Taipei City in 2015 and was the Japanese national Light Flyweight champion in 2014

Whilst Hiroto was still plying his trade in the amateur ranks his older brother Ryuto Kyoguchi was making a mark in the professional ranks, claiming the 2011 Rookie of the Year crown and breaking into the Japanese ranks whilst fighting under the guidance of the Osaka Teiken gym. Sadly for the Kyoguchi family Ryuto would get into some legal issues in 2015 and instead of Hiroto following his brothers lead and staying in Osaka he instead chose to leave the region and signed with the Watanabe gym instead, basing himself in Tokyo.
Kyoguchi debuted as a B Class fighter, like many decorated amateur fighters in Japan, and immediately impressed as he battered the poor Narathip Sungsut en route to a 2nd round KO win. It was clear from the very first seconds of his career that Kyoguchi wasn't just another debutant but was something a bit special showing lovely hand speed, an excellent array of punches, a mature poise to his work and a patient pressure style. Although Kyoguchi impressed in a multitude of ways it was arguably his body punching and combinations that stood out the most with the Thai lucky to last through the first round. Although Narathip had made his way into round 2 he failed to see out the second round as Kyoguchi punished the visitor with some brutal body punching.

Having scarcely broke a sweat to claim his first win Kyoguchi's team didn't waste time getting him back less than a month later, as he travelled to Thailand and battered Taweechai Yuyuet in just 33 seconds in Bangkok.

With two quick, easy, wins under his belt the Watanabe team put Kyoguchi in a huge step up as he battled Ohashi gym fighter Kenichi Miyazaki (then 10-2-1, 3) in a bout scheduled for 8 rounds. The contest was one of the chief support bouts on a Dangan show held in Osaka, and streamed live over the Boxingraise.com service. Kyoguchi had an opportunity to capture the attention of not only the Osakan fan base but also the fanbase of Boxingraise subscribers, and he took that opportunity by battering Miyazaki into a 3rd round TKO. Although Miyazaki had gone into win he proved to be the perfect foil for Kyoguchi to shine against. Kyoguchi picked his shots wonderfully, landed some lovely flowing combinations, and closed the show with some brutal body shots.

Just 3 months after stopping Miyazaki we saw Kyoguchi back in the ring, on another Dangan card featured on Boxingraise.com. This time around the talented Watanabe prospect was up against Filipino foe Michael Camelion, who had never been stopped prior to facing Kyoguchi. The supposedly tough Camelion proved to be no test for Kyoguchi who landed a peach of an uppercut on the Filipino dropping him hard. Although Camelion did get to his he was all over the place and the referee rightly stopped the bout there and then.

Kyoguchi closed out 2016 by fighting on the under-card of the big year ending Watanabe card at the Ota-City General Gymnasium. On that card Kyoguchi took on Junuel Lacar and again shone stopping Lacar in the third round following a brilliant finishing combination that sent Lacar down hard, where he was stopped. Like his two previous bouts this was later featured on Boxingraise.com and continued to show that Watanabe are willing to give all the exposure they can, and allowing fans a chance to see Kyoguchi develop, something that doesn't happen too often in Japan.

On February 28th we'll see Kyoguchi return to the ring in what will be his first title bout, as he takes on Armando dela Cruz (25-14-3, 11) for the vacant OPBF Minimumweight title. If he wins that, as many expect, the rumours are that the Watanabe gym will push for their man to get a world title fight before the end of 2017.

Talented, exciting and polished Kyoguchi is one of those rare talented who will need to fight near world level for us to really know how good he is. He has got question marks over his head, particularly in regards to his stamina and pacing, but looks like such a relaxed natural in the ring that it's hard to really say that even the stamina issues will play a part in his career. If there are stamina issues we suspect that they will be worked on at the Watanabe gym, especially given the experience of the people there.

His style is so pleasing on the eye and combines intelligent defence and brutal flowing combinations that he is going to attract a lot of fans in the years to come. As well as his usual aggressive style it does look like he has a more pure boxing style to call back on if, or when, he needs to. Also, considering how young he is, he will be part of the new wave of Japanese fighters in what looks set to be a golden age for the country and should be a name on the lips of every fight fan by the end of the year, whether he's won a world title by then or not.