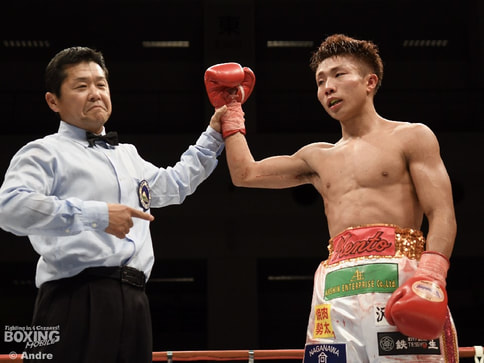 The Japanese scene has a lot of exciting prospects making a name for themselves as they rise through the ranks. A lot of those have pressure on them following successful amateur careers and the expectations of them to build on the foundations they developed in the unpaid ranks. For Kento Hatanaka (6-0, 6) [畑中建人] however it's not just his amateur pedigree that has put expectations on his shoulders but also his surname, a name he shares with former WBC Super Bantamweight champion Kiyoshi Hatanaka, Kento's father.

The elder Hatanaka, born in 1967, made his professional debut on his 17th birthday back in 1984. As a fighter Kiyoshi had a 25 fight career, starting in 1984 and ending in 1991. During his career he would claim the Japanese Super Flyweight title, defeating Tadashi Maruo in 1987, challenge Gilberto Roman for the WBC Super Flyweight title then move up, eventually beating Pedro Decima for the WBC Super Bantamweight title in 1991. Sadly though he would lose the belt in his first defense before retiring.

Since retiring Kiyoshi has set up the Hatanaka gym, which currently manages and promotes a number of fighters, including his young son and former 2-weight world champion Kosei Tanaka.

Born in 1998 Kento Hatanaka missed his father's entire fighting career but took to the sport like a duck to water and amassed a 32-10 (5) record in the amateurs. Whilst that doesn't sound amazing he had competed in a number of high school tournaments and looked like a natural in the ring. He was still a kid, but showed glimpses of real class.

In 2016 the youngster, then only 18, ended his amateur career and made his professional debut, faking on Takaaki Murakami on November 27th 2016 at the Aioi Hall in Kariya. His debut came exactly 32 years after his father's and like his father he debuted in a 4 rounder which saw him score an opening round victory. Although the win didn't get the 18 year old Hatanaka too much attention it was the perfect debut, taking out an opponent quickly and impressively.