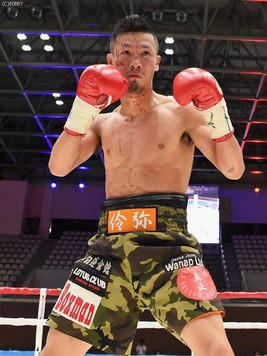 The lower weight classes have long been a focal point of Asian boxing, with a long line of great fighters making their name from Minimumweight to Super Featherweight. One of the next Japanese fighters looking to emerge as a star among the sports lowest classes is former Japanese Minimumweight champion Reiya Konishi (15-0, 5), who is rumoured to be fighting for the WBA Light Flyweight title in just a few short weeks. If he was to win the title he would join a list of Japanese Light Flyweight world champions and potentially become one of the new faces of the Kobe boxing scene, as well as a focal point for the Shinsei Gym.

Born in 1993 Konishi was long interested in combat sports, starting off with Karate befoe picking up boxing in junior high school.

It was Hozumi Hasegawa who first caught Konishi's eye, and the youngster would follow the career of “Ace of Japan” as Hasegawa went on to claim his first world title. Amazingly only a few years later Konishi would join the Shinsei gym and train alongside Hasegawa, as Hasegawa became the fighting leader of the gym.

Konishi would debut in 2013, aged just 20, and due to a lack of amateur experience he would only gain a C class license. By the end of 2013 he was 2-0 and would enter the 2014 Rookie of the Year competition managing to go all the way and claim the Rookie of the Year crown in December, out pointing Yuki Kubo. On route to hie Rookie crown Konishi had over-come Naoko Yoshimura in his first round bout and Jun Takigawa in the West Japan final.

With the Rookie of the Year title on his ledger Konishi had racked up a 7-0 (4) record and was starting to slowly get some attention. That attention didn't lead to big fights immediately but did see him step up and begin to fight in 8 rounders. During 2015 he would fight in 3 such bouts, going the 8 round distance in all 3 bouts and gain valuable experience against decent domestic fighters like Naoya Hariguchi and Shogo Hayashi.

Going into 2016 it seemed like it was time to let Konishi fight for a national title, but instead he continued to build his experience and did so whilst other gym members were getting more attention. He was slowly correcting his faults and laying the foundations for the future, with his gym building his experience and letting him him iron out some of the clumsiness that was engrained in his style. With those issues sorted the plan was a big 2017 for the talented youngster.

Konishi got his shot at the title in April 2017 as he competed against former amateur stand out Masataka Taniguchi for the vacant Japanese Minimumweight title at the 2017 Champion Carnival. The bout was a really good one on paper, and proved to be just as competitive in the ring with Konishi taking a razor thin majority decision win.

Around 5 months after he won the title Konishi made his first defense of the belt, defeating multi-time world title challenger Shin Ono with a majority decision. The bout saw both men being deducted points for head clashes, and both later went to hospital with double vision in what was a tough contest. Things were much easier in Konishi's second, and final, defense as he out boxed, out worked and out fought the over-matched Kenta Matsui with a dominant decision win.

In the ring Konishi is a strong fighter, he looks a bit basic in terms of his technical skills but he's sharp,has great energy and a stiff jab. On the inside he can really work away and although not a powerful puncher he is often seen forcing back fighters due to his physicality. His technical flaws do look like something that would see him come up short against the best fighters at either Minimumweight or Light Flyweight, but he'd be a handful against anyone and his aggression and stamina will keep him competitive with anyone but the divisional elite.