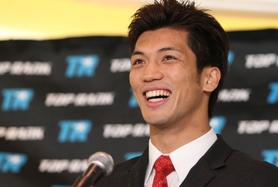 Courtesy of Chris Farina and Top Rank
In Japanese boxing right there are numerous big name fighters. We have world champions like Shinsuke Yamanaka, Takashi Uchiyama and Kazuto Ioka, we have major youngster like Naoya Inoue and Sho Ishida and we have, arguably, the best female boxer on the planet with Naoko Fujioka.

Despite all those fighters, and every other active Japanese fighter, one name seems to draw more attention than any of them. Ryota Murata (11-0, 8) [村田 諒太].

Whilst Murata is only in the embryonic stages of his career the attention he gets from both fans and media is second to none. This guy for all intents and purposes is already a boxing star and it seems he will only become more and more popular as time goes on and as he competes in more bouts.

What makes Murata so special is really hard to define. One might say his movie star looks, someone else would say his charisma and natural charm, though the most common answer from boxing fans will be his amateur pedigree and the fact he's "bigger" for a Japanese fighter. Lets be honest, Japanese Middleweights aren't that common and as a result Western fans have an interest in him partly because he could competing with fighters they recognise. This isn't the case for fighters like Inoue, Ioka or Sho Ishida.

Born in Nara City in 1986 Murata would pick up boxing in junior high school and, for the early part of his development, be taught by Hiroaki Takami who competed in the 1984 Olympics as a Bantamweight. Although it was early days Murata did seem to enjoy the sport and two years later he moved on to training at the Shinko Gym before moving onto a high school gym and later boxing for his university. Whilst he did have success there was some issues with his style and he suffered several losses via disqualification.

Unfortunately those losses saw Murata deciding to turn his back on boxing. He had fallen out of love with the sport and had seemingly had enough.

Thankfully, for us as fans and for Murata as a fighter, a journey to Thailand relight his fire and love for the sport and returned with a vengeance to prove himself.