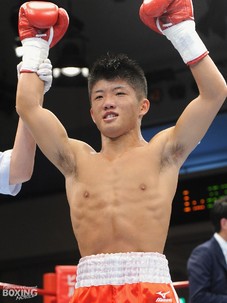 One of the most exciting things about the Japanese boxing scene right now is the sheer volume of incredibly talented young prospects, all coming through as part of a golden generation. We've seen some of those youngsters race to world title success, such as Naoya Inoue and Kosei Tanaka, who have been receiving international praise for a while, whilst others have just started their professional journey's. Despite being new to their profession a number of those fighters are tipped to become major stars of the Japanese scene over the years to come.

One of those fighters is 19 year old Ginjiro Shigeoka (1-0, 1) who is hotly tipped by those in Japan as one of the next great success stories from the Watanabe Gym, the same gym that has guided the likes of Takashi Uchiyama, Kohei Kono, Ryoichi Taguchi and Hiroto Kyoguchi to world titles in recent years.

Born in Kumamoto, though now based in Japan, Shigeoka got a lot of acclaim from his days in the amateur ranks. As an amateur he was a sensation on the domestic scene, winning 5 national titles at the high school level and going 56-1 (17), with his sole amateur loss coming to his older brother in rather peculiar fashion. That sort of amateur record isn't totally unheard of, but is still incredibly impressive and given how competitive the Japanese domestic scene is at high school level it is really a sign of what Shigeoka could do at a young age.