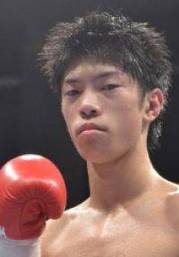 In recent years we've seen numerous young Japanese fighters turn professional under a huge cloud of expectancy. Unlike in the west where top prospects are hidden and developed slowly these particular fighters are "thrown in" with the mindset of fighting for their legacy and looking to rise to the top early rather than slowly run up a huge record of less than impressive victories.

One such fighter is former world champion Kosei Tanaka (7-0, 4) who, at just 21 years old, is expected to become one of the future superstars of Japanese boxing. In fact he's expect to emulate the success of fighters like Kazuto Ioka and Naoya Inoue.

Tanaka, like Ioka and Inoue amongst others, was a former amateur stand out. Although his actual amateur record is difficult to find he was multi-time amateur champion domestically as well as a top former junior amateur.

Whilst we're unsure on the true win-loss record of Tanaka amateur we do know that domestically he won titles at both the 66th and 67th National Sports Festival as well as winning the 66th All Japan High School Championship. Internationally he was the runner up in the 2013 Asian Youth Championships, being narrowly beaten by the home fighter in the final, and reached the quarter final of the 2012 AIBA Youth World Championships.

Although the international titles weren't forthcoming Tanaka was impressing everyone and was the recipient of the 2012 "State of the Art" award as an amateur in the 2012 Japanese annual boxing awards. It seemed clear that when he turned professional there was going to be a lot of expectation on his shoulders.