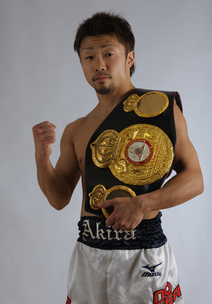 Courtesy of Ohashi Gym
When it comes to the most consistently over-looked Japanese boxers few rival the teak tough and often highly exciting Akira Yaegashi (24-5, 12) [八重樫 東] who at the moment may well be the best pound-for-pound action fighter in the world, unfortunately however his career is coming to an end.

Born in Kitakami, Iwate back in 1983 Yaegashi has been a product of the Japanese amateur system which has been one of the keys to the recent Japanese boxing success. As an amateur Yaegashi went an impressive 56-14. Those wins helped him claim an interscholastic title and a title at the National Sports Festival of Japan.

Yaegashi would make his professional debut soon after his 22nd birthday and like many highly tipped youngsters in Japan he started off in 6 round contests against stiff opponent. On debut Yaegashi became the first man to stop Tomoyoshi Nakayama (who was fighting for the 20th time). Despite the fact the bout was scheduled for 6 rounds the promising youngster needed just 80 seconds to put his man.

The young Yaegashi wouldn't need much longer in his following he took out Poonsawat Eausampan (KO1) and Danchai Sithsaithong (KO2) within 6 months of his debut. Despite the fact he had been scheduled in 22 total rounds (his debut of 6 rounds and the following 2 contests of 8 rounds), he had only needed a combined 4 rounds to put away his first 3 opponents.
​
It wasn't until Yaegashi's 4th professional contests that he even saw the beginning of round 3. In his 4th bout he was taken the full 10 rounds by the tough Elmer Gejon of the Philippines. Although Yaegashi had been pushed hard by the more experienced Filipino he had still done enough to claim a decision and prove that he had the stamina for 10 rounds.

Yaegashi would claim his first professional title in his 5th professional contest as he stopped Thai Minimumweight champion Weerasak Chuwatana for the vacant OPBF title, a title he defended once stopping Liempetch Sor Veerapol inside a round.
Pornsawan Porpramook Vs Akira Yaegashi 2011-10-24 by tiguidou421