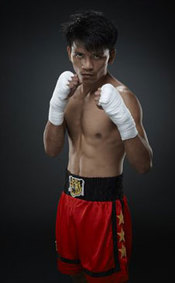 Courtesy of boxrec.com
At the beginning of 2014 Merlito Sabillo (23-2-1, 12) was a world champion, sadly by the end of the year he was holding on to his career by a thread.

The 30 year year old Filipino, a product of the ALA Gym, may not be a high profile name, in fact many in the fighters home country wouldn't recognise him if they saw him on the street, but he is a talented fighter who has shown that it's never too late to start.

Sabillo came from an incredibly poor background. He had viewed his future in sports but had to try several to find the one for him. He had tried basketball but figured he was too short, he tried BMX but the bikes simply cost too much and despite being good at Karate it wasn't a sport that would pay the sums he needed.

Eventually Sabillo settled on boxing and followed in the footsteps of Manny Pacquiao who had literally punched his way out of poverty.

Although Sabillo only had a short amateur career and failed to win any major tournaments he had fallen in love with the sport and several years later he would turn professional.

Aged 24 when he made his professional debut Sabillo was certainly a late starter though his talent was obvious and with in a year of his debut in January 2008 he had racked up 6 wins.

It wasn't until Sabillo's 8th professional contest that he was pushed hard for the first time as Jetly Purisima really gave Sabillo a tough battle in what was Sabillo's first ever 10 round contest. Sabillo and Purisima would meet in an immediate rematch with Sabillo coming out a more conclusive winner the second time around, though it was obvious that the two men had unfinished business.