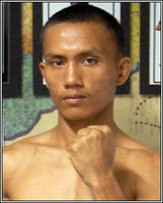 We have often received comments suggesting that we are very biased towards coverage of Japanese boxing. Whilst we will openly admit that we do feature Japanese boxing more predominantly than the other countries in Asia that is usually because the Japanese boxing scene is the easiest to follow out of all the Asian countries.

If Japan is the easiest then we dare say the second easiest is the Filipino scene which is arguably the second biggest boxing country in Asia, in terms of top fighters. The Filipino scene of extends far beyond the big names at the top such as Manny Pacquiao and Nonito Donaire and one of our favourite fighters in Asia is actually a little known Filipino called Jonathan Taconing (22-3-1, 18) who is one of the most exciting, hardest hitting and most promising fighters in Asia. Sadly however Taconing is also one of the sports most over-looked fighters and one of the men despite being a former world title challenger and the current OPBF Light Flyweight champion.

Taconing first began boxing aged 14 and was fought in around 30 amateur bouts. A lot of those, whilst technically amateur contests, saw Taconing paid around $12 for 3 rounds work at siesta events. Although he was being technically paid for those contests he didn't consider turning professional until after Manny Pacquiao defeated Fahsan 3K Battery in December 2004. At the time Taconing was heading towards his 18th birthday.