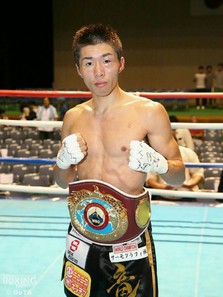 One of the revelations of Japanese boxing over the last couple of years has been the unheralded rise of Ryuya Yamanaka (16-2, 5) who at just 23 is one of the sports youngest current world champions, but has lacked the fan fare and attention of other young world champions. Part of that is down to the fact the youngster is fighting at Minimumweight, which often gets over looked anyway, and part of it is the fact that he doesn't have a real selling point to help build his profile to an international audience. Despite that he is one of the most pure world class boxers in Japan and looks like he could be set for an amazing future.

Like many Japanese youngsters Yamanaka was attracted to boxing by the popular manga “Hajime No Ippo”. He began boxing as a youngster due to the manga and would eventually join the Shinsei gym, thanks to the success and fame of the highly popular Hozumi Hasegawa. Despite being from Osaka the desire to train with Hasegawa saw Yamanaka train in Kobe.

At the age of 17 Yamanaka began his professional career, debuting in June 2012 against Kazuki Koyanagi. The bout saw Yamanaka take a 4 round decision and begin his career with a win. By the end of 2012 he had moved to 3-0, scoring decisions Kenta Yokoe and Junpei Omori. It was good start to his professional career and given his age he showed some early promise.

After beginning 2013 with a stoppage win over Takayuki Teraji to move to 4-0 (1) Yamanaka was then entered into the West Japan Rookie of the Year. Sadly for the youngster his Rookie of the Year dreams came to an end after just 142 seconds, with Yamanaka being stopped by Kenta Shimizu.

Despite the loss Yamanaka returned to the ring less than 3 months later, taking on the more experienced Masaki Hirai. Despite having 9 losses from 15 bouts Hirai had never been stopped. That changed when Yamanaka stopped him in 4 rounds, due to some solid body shots that took Hirai's legs away and forced the referee to step in. Only a few weeks later Yamanaka would score a win over Junya Nishikawa, going 6 rounds for the first time in his career.
Whilst 2013 had started with the loss to Shimizu it had ended with Yamanaka rebuilding his confidence. That confidence continued to build in early 2014 when he moved into 8 rounders and defeated Hiroki Nishikawa. Sadly for Yamanaka his winning run would come to an end in his second 8 round bout, as he lost a split decision to the more experienced Filipino Roque Lauro. Entering the bout Lauro was ranked #4 by the OPBF and fighting in his 31st bout as a professional, with that experience being the key to his victory over the then 19 year old Yamanaka, who was in just his 9th bout.

The loss to Lauro seemed to do more good than harm to Yamanaka who would end 2014 with a victory over Takahiro Murai. That win would be followed in 2015 with a victory over Ronelle Ferreras, as Yamanaka began to look more and more comfortably fighting over the 8 round distance. With that in mind it seems like Yamanaka and his team were happy to try something new, and he went into a 10 rounder against Yoshinori Wakahara, taking a decision there too. He would secure one more win, late in 2015, out pointing Ryo Narizuka, as his rise continued.

To begin 2016 Yamanaka was ranked by the WBO and had began to generate a bit of buzz. It wasn't a lot but those with an eye close to the lower weights had began to notice him picking up wins with the victory over Ferreras being particularly notable. Despite his growing reputation Yamanaka's first bout of 2016 was a disappointing one, as he took on Thai visitor Thoedkiad Weerachon. The Thai visitor lasted just 3 rounds with Yamanaka, with Yamanaka's body shots dropping the Thai and forcing the referee to step in.

Yamanaka would make a huge step up in class in late 2016 as he battled against former WBO world champion Merlito Sabillo for the vacant OPBF Minimumweight title. The bout was seen as a monstrous step up for Yamanaka, but one he made with relative ease, show casing his speed, accuracy and skills whilst making Sabillo look slow and clumsy. The Filipino had some success, cutting Yamanaka over the left eye, but looked second best throughout the contest with Yamanaka securing the win with scores of 119-109, 118-110 and 117-111 to claim his first professional title.

Sadly Yamanaka vacated the title quickly, with Hiroto Kyoguchi winning it in early 2017 following Yamanaka's decision to focus on getting a world title fight. As a result Yamanaka would begin 2017 by fighting against Khanongmek Sithkrukong, who lasted less than 100 with Yamanaka. That was however just a prelude for Yamanaka who would return in August and take a thrilling win over Tatsuya Fukuhara to claim the WBO title, and put himself on the boxing map.

The bout with Fukuhara was a high intensity and thrilling back and forth contest with Yamanaka picking up the win courtesy of a narrow decision, winning with scores of 115-113, twice, and 116-112. Despite the win Fukuhara did suffer some real damage in the fight, and under-went surgery after the win to repair a fracture to his left orbital, an injury caused by an accidental headclash. As a result of the injury it would be almost 7 months before Yamanaka would return to the ring for his first defense.

In his first defense Yamanaka took on Moises Calleros, who had lost his own war with Fukuhara for the title in 2017. The bout was a mandatory defense for Yamanaka was was expected to be a really tough contest for the champion. Instead however it was a showcase win for Yamanaka who took his chance to shine and looked amazing as he toyed with the tough Calleros and then broke his heart, forcing the Mexican to retire at the end of round 8.

The win over Calleros was the coming out party Yamanaka had been hoping for and saw him not only impress but do so in a way that really put him on the map as a very talented and exciting pure boxer. Not only that but he seemed to be physically maturing into a fighter who is confident about his strength and power. Whilst he is growing in confidence he is still a fighter who is more reliant on his speed and skills, and it's those that open up his powerful shots, including a really outstanding uppercut.

Yamanaka's future looks really bright. He's very young, very talented and in a division with plenty of options. Whilst the Minimumweight division might not be as stacked as the one directly above he does have a lot of interesting match ups there before he ultimately moves up and joins the ranks at Light Flyweight, some where down the line. By then he will have matured further and may well have developed his power further making him an even more rounded fighter at the top level.