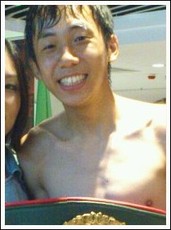 Courtesy of Boxrec.com
In the past Hong Kong has never been viewed as a boxing nation but 25 year old "Wonder kid" Rex Tso (19-0, 12) [曹星如] is one man wanting to put his nation on the boxing map as our sport continues to extend further than ever before.

Despite the country not being a typical boxing country Tso is from a true boxing family. Not only do his 3 brothers fight but his father was a 7 time national amateur champion. Although the Tso family are only really known in Hong Kong, two of Tso's brothers did fight internationally in notable tournaments.

Although Rex himself never really made a great name for himself as an amateur he was seen as a naturally gifted fighter who very quick and able to avoid shots with surprising ease. Unfortunately he was some what lazy and what success he generally got was based more on natural attributes and physical gifts than hard work or dedication. He was viewed as the best of the 4 fighting brothers in terms of natural talent but his laziness was capitalised on in the unpaid ranks until he signed up to work with trainer Jay Lau.

Under Lau's tutelage Tso has turned to the professional ranks and has become the most famous boxer in Hong Kong.

Rex made his professional debut back in September 2011 in Hong Kong on a card that saw Filipino Diarh Gabutan defend his WBO Oriental Bantamweight title, since then Tso has traveled through Asia for both bouts and sparring. He has so far recorded wins in the Chinese mainland, the Philippines and Singapore as well as Hong Kong where he not only debuted but also stopped Timur Shailezov to claim the WBC Asia Council Continental Super Flyweight title.