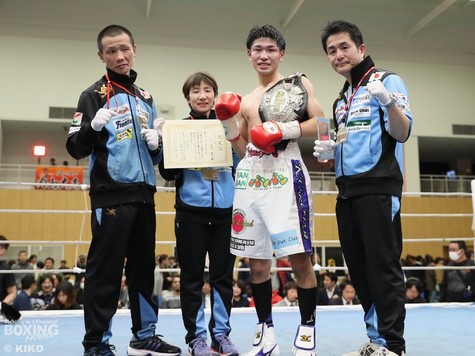 The Flyweight division was, a few years ago, the best division in the sport bar none. It had everything, top talents, notable names, exciting fighters, a nice blend of styles, and the top fighters were mixing it up on a regular basis to provide us with some Fight the Year contenders and a good list of possible match ups. It was the division for the hardcore fight fans, much like Light Flyweight has become in the last year or so.

Sadly a lot of the fighters who had made the Flyweight division so exciting have moved up in weight or are now faded forces. The likes of Roman Gonzalez, Juan Francisco Estrada, Kazuto Ioka, Brian Viloria, Amnat Ruenroeng, Herrnan Marquez, Giovani Segura and Luis Concepcion all made a mark on the division in the space of just a few years. Now the division is a bit weaker and it's allowed some lesser known fighters to edge towards a world title fight, including Japan's Masayuki Kuroda (30-7-3, 16) [黒田雅之], who is currently ranked #1 by the WBA at Flyweight.

Kuroda is certainly not a new name in the sport. The 32 year from the Kawasaki Nitta gym has been a professional since 2005, he's fought in a world title bout before and is a 2-weight Japanese champion, but is also a man chasing a shot at a world title, and has a real chance to get a shot either later this year or early next year.

As mentioned Kuroda made his debut in 2005, blowing out Hiroyuki Ishigaki in just 26 seconds back on May 31st. He would follow that win up with another first round stoppage, defeating Jun Tadano with only seconds of the opening round left. Sadly for Kuroda his winning run would then come to an end as Shun Kurosawa took a majority decision over the then 19 year old Kuroda. Despite the set back Kuroda would immediately get back to winning ways and would string back-to-back opening round wins in 2006 before taking a 4 decision over Kazutaka Ito, in what would be Kuroda's final 4 rounder.

Having progressed into 6 round bouts by late 2006 Kuroda would continue his good form, stopping Seiya Hirakawa in 3 rounds and then blasting out Tsuyoshi Yamamoto in the opening round.