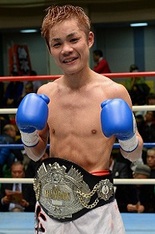 The Flyweight division is the most packed in boxing right now and looking for a weak link is a fruitless task, especially at the top. The “weakest” of the world champions is either Amnat Ruenrong or Juan Carlos Reveco, two very good fighters, and when you have contenders like Kazuto Ioka, Brian Viloria, Hernan Marquez, Giovani Segura, Johnriel Casimero, Moruti Mthalane and McWilliams Arroyo it's easy to over-look some fighters in the division.

Possibly the most over-looked Flyweight in recent years is the always fun to watch, battled hardened work horse Suguru Muranaka (24-2-1, 8), the former Japanese champion who was forced to move up in weight when his body refused to boil down.

Muranaka's failure to get wider recognition is one of boxing's mysteries though is also relatively easy to explain. He's not recognised in the west due to how deep the division is. His talented is there, his level of excitement is through the roof but he's not yet managed to win at the highest level, not has he beaten a high level Mexican or Argentinian foe that could have helped him becoming a “name” fighter. We do however expect one of those break out wins to occur for Muranaka, somewhere down the line.

It was more than 10 years ago that Muranaka, a then fresh faced 19 year old, made his debut. On that night he scored a 4th round TKO against fellow debutant Masashi Muto. Just 4 months later Muranaka returned to the ring and overcame the more experienced Hayabusa Uhara with a 4 round decision. Going in to that bout Uhara was becoming a professional loser, but was a tough one and Muranaka going the 4 round distance was nothing to be ashamed of. Only a few weeks later Muranaka improved his perfect start by moving to 3-0 as he over-came Kiyoshi Izawa with a 4 round decision win.