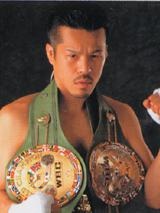 When we talk about about the most popular Asian fighters of the last 30 years there is few who rival Japan's immensely popular Joichiro Tatsuyoshi (20-7-1, 14) a man who managed to become popular around the world. In fact in recent years only Manny Pacquiao has been a more popular Asian boxing figure from which should tell you everything you need to know about him.

Born in the historic city of Kurashiki in Okayama prefecture in 1970, Joichiro was born to be a fighter. In fact some reports suggest that he was actually named after anime character Joe Yabuki from boxing anime "Ashita No Jo" (or "Tomorrow's Joe"), one of the most popular Japanese anime's in history.

The youngster Joichiro was brought in to boxing by his father, a huge fan of the sport. Despite just being a toddler he was being taught the basics of the sport and it seemed that he enjoyed it. The teachings then progressed with Joichiro continuing with the sport through school and whilst still just a teenager he began winning national amateur championships. The teaching of his father and the natural talent that he possessed made him one to watch even in the unpaid ranks.

As is often the case with top Japanese amateurs Joichiro began catching the attention of both the media and the talent scouts.

After 18 straight wins in the amateur ranks thoughts turned to the Seoul Olympics with Joichiro expected to qualify and be a serious medal contender. Unfortunately however the teenager would lose in a qualifier and miss out on the Olympics. The loss, put down to poor physical conditioning, was Joichiro's only amateur loss as he compiled another wise perfect 18-1 (18) record.