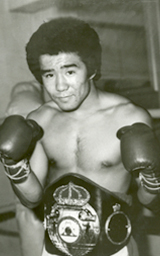 When we look back over the history of Japanese boxing there are a lot of world champions who are often forgotten, especially by Western fans. There are a number of reasons why they are so over looked, and often it's due to them having a short reign and fighting at a lower weight class. That's certainly the case for Katsuo Tokashiki (19-4-2, 4), who is better known with some fans for his non-boxing work than his actual boxing career, but more about that later.

Tokashiki was born in Okinawa in and 1960 both moved to Takarazuka in Hyogo as a young child due to the work of his parents. Sadly though he was a problematic child, and dropped out of high school. He was reportedly involved in street fights on a regular basis and had earned a reputation locally due to his behaviour.

Despite being a delinquent he was bit by the boxing bug in 1977, whilst watching the first bout between Yoko Gushiken and Jaime Rios. At the time Tokashiki was in his teens, and would travel to Tokyo to begin his own professional boxing career, training at the Kyoei Gym, who were also managing Gushiken's career.