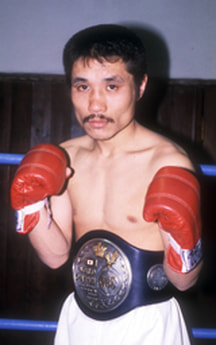 When we talk of the best Japanese Light Flyweights of the late 1970's and early 1980's the first name that springs to mind is Yoko Gushiken, who dominated the world scene from 1976 to 1981 with 13 defenses of the WBA title. What is often forgotten is that he wasn't the only Japanese fighter holding a Light Flyweight title in 1980, with the often forgotten Shigeo Nakajima (13-5-1, 7) claiming the WBC title in early 1980 and having a brief reign as a champion. Even following his reign Nakajima would remain a fixture on the world stage until his retirement.

Sadly there is a reason Nakajima is often forgotten, whilst Gushiken is well remembered by hardcore fans, and that was the fact Nakajima's reign lasted less than 3 months, whilst Gushiken's lasted several years, and also ended with Nakajima losing the belt in his first defense. There is however a very well known reason for why his success was so limited, but we'll get on to that a little bit later.

Nakajima was born in Yuki, Ibaragi in 1954 and he was an excellent amateur fighter, running up a brilliant 80-15 (48) record in the unpaid ranks. That sort of success had earmarked him as a real potential star of the future, and showed that he was a brilliant talent, a boxing genius if you will.