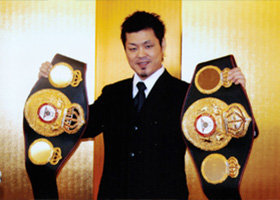 When we think of multi-weight Japanese world champions we tend to overlook a number of them. We all know about Hiroki Ioka, Koki Kameda, Naoya Inoue, Hozumi Hasegawa, Kazuto Ioka, and Kosei Tanaka but there are a number that we don't mention. One of those is former is Hideki Todaka (21-4-1, 10) who held the WBA Super Flyweight and the WBA "interim" Bantamweight title, before the WBA handed those out like candy.

Todaka isn't remembered too well, even by modern fans, despite fighting in the 1990's and early 2000's. Despite that "Samurai" was a very talented fighter and someone worthy of knowing more about.

As a youngster Todaka was lacking in discipline and would often get into trouble, with streets and generally poor behaviour. He would sign up with the Miyazaki World gym whilst still in his teens and earn a professional license, but had to wait years for his debut due to a back injury that prevented him from getting into the ring.