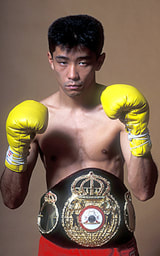 Japan's Yukito Tamakuma is not a name you will find on many boxing websites, and that's partly to do with the fact Tamakuma didn't fight under his birth name, but also because he's actually one of the nore obscure Japanese world champions. He's well remembered by hardcore Japanese fans, who remember his career in the 80's and early 90's, when he fought as Leopard Tamakuma (27-5-1, 13), and enjoyed a short reign as the WBA Flyweight champion in the early 1990's.

​Born in Aomori Prefecture in January 1964 Tamakuma took to boxing as a youngster, fighting as a an amateur in High School, and later university. He seemed to learn at a young age that his chin wasn't the best, and he focused on being defensively smart as a youngster. Despite being a rangy youngster he also developed a style that was effective not just at range, but also at close, with a smart boxing brain and good counter punching. What was also notable about Tamakuma's time as an amateur was that he converted to being a southpaw, albeit a right handed southpaw. When he turned professional this was pretty obvious from the way he threw the left hand, even in the later stages of his career, but meant his lead hand was particularly good and worked well with his defensive mind set.