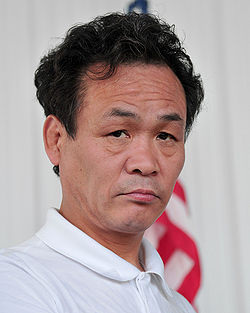 Courtesy of boxrec.com
Through the illustrious history of Korean boxing few stand out as highly as former WBC Light Flyweight champion Jung-Koo Chang (38-4, 17) who dominated his division through out the 1980's and was affectionately known as "The Korean Hawk" due to his stylistic similarities to Aaron "The Hawk" Pryor.

Despite the fact Chang hadn't had any amateur success it was obvious he was a born fighter with a relentless swarming style which brought him 18 victories within 22 months.

Having been very impressive in his early career Chang was moved in to world class in just his 19th fight. Chang was matched against the very talented Panamanian Hilario Zapata who was in his second reign as the WBC Light Flyweight champion. Chang chased Zapata from pillar to post and was impressive in his big step up though was controversially denied the world title on a razor thin split decision as he suffered his first professional loss.