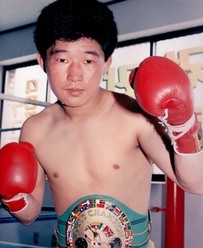 The Korean scene of the 1980's was incredibly active, exciting and packed. It was full of great fighters, like Jung Koo Chang, Myung Woo Yuh and Sung Kil Moon. It developed a number of fighters who are now long forgotten and their career's have sadly been overlooked and ignored by modern day fans. Among those was 2 weight world champion Yul Woo Lee (19-3, 10), who had a very short career, with less than 5 years separating his debut and final bout, but he would fit a lot into his career before retiring at the age of just 23!

Born in 1967 in Okchun, Lee was the youngest of 9 siblings and he began boxing in high school.

Despite picking up boxing at high school little is known about Lee's amateur credentials, if he had any, though suspicion is that if he did have any it was very limited given that would make his professional debut at the age of 18 in 4 round bouts.