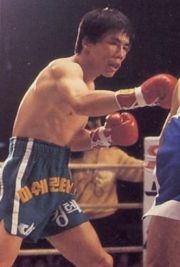 Courtesy of Boxrec.com
In the past few years South Korea has had a bit of a dearth in terms of quality professionals. In the past however the country has had numerous fantastic fighters across a selection of divisions especially in the 1980's through to the early 1990's in which Korea seemed to almost continually pour out fantastic fighters.

One of the most notable amongst the Korean fighters that emerged in 80's and 90's was Sung-Kil Moon (20-2, 15) a 2-weight world champion who spent nearly his whole career fighting at the world level, in fact all but 7 of his professional bouts were for a world title.

Prior to turning professional in 1987 Moon had established himself as one of the elite amateurs. He had amassed an incredible record that is said to have been 219-22 (164) and he's been fighting at the top level in the unpaid ranks for several years.

Amongst Moon's amateur achievements were Gold medals at the 1986 World Amateur Championships, the 1985 World Cup and both the 1982 and 1986 Asian Games. These were the crowning achievements but Moon had also impressed in tournaments where he failed to medal including the 1983 World Cup and the 1984 Olympic games reaching the Quarter finals in both.

Just 5 months after claiming the 1986 Asian Games Gold medal Moon would make his professional debut. Unlike fighters now a days Moon wasn't given an easy debut and went in against experienced Filipino Ric Bajelot (who was 11-2-3 going in to the bout) though Bajelot was experienced he was no match for Moon who stopped him in the 4th of a scheduled 8 rounds.

Moon would be forced to continue with hard bouts and in his next bout he was put in against experienced Thai Singnoi Singkrungthon who, like Bajelot, wasn't able to cope with Moon's power and was stopped in 3 as Moon raced out to 6-0 (6) with in 15 months of being a professional.

Having been impressive in his first 6 bouts Moon would then compete for the WBA Bantamweight title against the then unbeaten Khaokor Galaxy (who entered 18-0) who had claimed the title just 3 months earlier upsetting     Wilfredo Vazquez. Despite a tentative open the bout started to come alive though a head clash early in round 6 forced an early (and disappointing) end to the bout. Due to cut from the head the fight went to the scorecards which had Moon winning a 6th round technical decision to become a world champion after just 7 bouts.

Moon's title reign would last 11 months and see him defend his belt twice, defeating Edgar Monserrat (TKO7) and Chiaki Kobayashi (TKO5) before a rematch with Galaxy, in Thailand saw Moon suffer his first loss in a humbling manner with Galaxy dropping him twice in round 11 and giving him a genuine pounding in round 9. Although Moon had proven his heart and toughness in the bout he was made to look like a novice (which in all honesty he was with the bout being just his 10th as a professional) by the talented, though often forgotten Galaxy.

Following the loss to Galaxy, Moon would move down to Super Flyweight and just 6 months after the Galaxy rematch Moon was ready for another title bout. In just his second bout since losing his unbeaten record Moon would face the WBC Super Flyweight champion Nana Yaw Konadu in what would turn out to be a thrilling bloodbath with both men being sent to the canvas. Between rounds 9 and 10 the referee called a halt to the action due to a cut Moon had suffered from an early clash of heads that had worsened and like in his first title bout Moon would claim his belt via a technical decision.

Having claimed his second world title Moon would go on an excellent run over the following 3 years as he recorded 9 title defenses against some excellent competition. The first defense saw him defeating former 2-time world champion Gilberto Roman who although showing real flashes of talent had been hurt and was looking like a fighter who was starting to be worn down. Sadly Roman died just 18 days later and this loss was the final bout of his career.

Moon would also defend against Kenji Matsumura, Konadu, Ernesto Ford, Torsak Pongsupa, Armando Salazar, Greg Richardson, Hilario Zapata and Carlos Gabriel Salazar. Of those men only Richardson and Salazar managed to see the final bell as Moon's destructive power and relentless wok made life difficult for everyone who got in the ring with him.

Although Moon had struggled with both Richardson, who moved very well and thoroughly frustrated Moon and Salazar who had cut and hurt Moon, the champion managed to hold his belt until Jose Luis Bueno defeated him via split decision. Bueno, like Richardson, used his superior speed to frustrate the Korean fighter who had some success through the fight but not enough to claim the  victory.

The loss to Bueno was the last bout of Moon's career and he retired aged 30. Although his professional career was just 22 fights long and lasted less than 7 years Moon's legacy was that of a great action fighter with a genuinely hurtful punch, real heart and although he was dropped several times as a professional he was never stopped. He not have been the most well schooled fighter but his desire to win really was second to none. Sadly for Kim however his style likely cut his career short due to the accumulated punishment he'll have taken that had to have sped up his "aging" process in the ring.

Although Moon never fought in the US his name was taken by musician Mark Kozelek who uses the name "Sun Kil Moon" as his musical moniker and has recorded 8 albums under than name including tracks after the tragic careers of Duk Koo-Kim (Moon's compatriot), Salvador Sanchez and Filipino great Pancho Villa.

The video below features Moon's first fight with Konadu, a bout that saw Moon claiming his second world title. The fight really exemplified the style that Moon is known for with his relentless aggression, high work rate and although he was bloodied and dropped he didn't know how to take a backwards step. It may not be pretty but it's thoroughly enjoyable, much like Moon's career. The video is thanks to kmjns01,