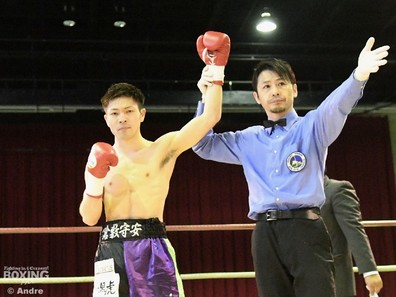 Right now the Japanese system is pouring out fantastically promising fighters in the lower weight classes, with a lot of them competing in, or around, the Flyweight division. One of those, one of the most interesting in fact, is Seigo Yuri Akui (12-1-1, 8) [阿久井政悟] is who is incredibly exciting between the ropes and, at the age of 23, promises a lot. He is perhaps not quite as highly regarded as some of the other Japanese prospects in the division, but isn't far behind and is seen as one of the best long term hopes not just at 112lbs but in Okayama in general.

Akui took to the sport after being influenced by his father and uncle, both of whom were professional fighters themselves. That lead to Akui having a relatively short amateur career, where he went 20-7, before making his debut at the age of 19 back in 2014.

As a professional Akui fights out of the Moriyasu Gym, who have guided him through out his career. Sadly fighting in Okayama didn't give him many gym options, but he does appear to have settled happily at the Moriyasu and looks to have a lot of trust in the the gym. That trust has been repaid with the gym getting him a high level of sparring and fights against some pretty notable competition, despite only having a short career so far.

On debut, in March 2014, Akui defeated the then 1-0 Yuki Sueyoshi, taking a clear 4 round decision over Sueyoshi in a regional Light Flyweight Rookie of the Year bout. The win saw Akui box well on the outside, using his jab and right hand really well, to neutralise the hooks of Sueyoshi. The next round of the tournament saw Akui get a bye when he opponent pulled out of a bout scheduled for July. As a result Akui would meet the then 3-0-1 Michitaka Muto in the West Japan Rookie of the Year Final. Muto would be dropped in the opening, from a right hand, before Akui secured the 4 round decision to claim the West Japan crown. He was also crowned the MVP.

Having won the West Japan Rookie of the Year crown Akui's next bout would see him take on another of the regional Rookie of the Year winners, Seta Ogido in November. Sadly for Akui he was unable to defeat the then 6-1 Ogido, with the two men fighting to a 4 round split decision draw. This would be Akui's final bout of 2014, and he would be out of the ring for more than 8 months following this set back.