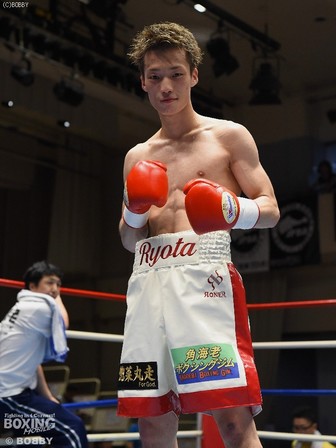 The Kadoebi Gym is one of the most notable in in the Kanto region of Japan and has a number of talented fighters. These include some recognisable names, like Hiroki Okada, Kyotaro Fujimoto and Valentine Hosokawa, as well as some less well known fighters and some highly regarded prospects, who are expected to go a very, very long way. One of those top prospects is 23 year old Flyweight Ryota Yamauchi (2-0, 2), who is being pegged to have a massive 2018 and move into the title picture, if not claim his first, before the end of the year.

Dubbed a “Super Hope” by his gym the expectation on Yamauchi is huge, but it's certainly not without good cause. As an amateur he went 38-15 (14) and impressed at the Under 15 level with a style that looked like he was going to be able to make a mark on the professional scene. As an amateur he mixed with Takuma Inoue, battling with Inoue in 2012, and the talent he had was obvious from a very young age.

The promise Yamauchi had saw him interest a number of gyms, though he settled with Kadoebi following in the footsteps of Kazuki Saito who he had gone to the same university as. It seemed like the move the move was helped by the fact the gym not only had Saito but also by the general feel of the gym and he quickly settled.

Given his amateur background Kadoebi had no problem pushing Yamauchi for a B class license and he managed to acquire the license before his debut, back in June of 2017. On debut Yamauchi took on Thai visitor Supaluek Noiwaengphim and the youngster impressed with a razor sharp performance that showcased his footwork, speed, shot selection and defense. Although the Thai was clearly over-matched Yamauchi didn't look to just blow him out but instead get used to fighting with no head gear and get used to boxing as a professional. Having shown his skills through the first round he hunted a stoppage in round 2 and got it, following a second knockdown of the Thai who had taken some heavy leather to the body. It was clear from the stoppage that Yamauchi had a tremendous left hook to the body, having scored both knockdowns with the shot and despite it being his debut he had that natural fluidity that always impresses.

Following his excellent debut Yamauchi was stepped up several levels at once, as he took on former OPBF title challenger Lester Abutan. Although limited Abutan was a dangerous opponent, especially for someone with as little professional experience as Yamauchi. Abutan had been a major force on the Filipino scene and had scored notable wins over Renren Tesorio, Mateo Handig and Rene Patilano whilst running Fahlen Sakkreerin Jr razor close in 2016. The danger of Abutan was clear through out as he looked to land hayemakers on Yamauchi, there was little thought behind what the Filipino was doing, but a lot of power in his shots and he looked to smash through Yamauchi. The Japanese fighter adjusted well to the hayemakers from Abutan, used his foot work smartly and set traps for Abutan, who was dropped hard from an over-hand right. The Filipino recovered to his feet but was unable to recover his senses as Yamauchi piled in the pressure and forced the referee to save the visitor, who had become a human punch bag.

So impressive was his win over Abutan that the East Japan Boxing Association chose him as the New Comer for December 2017, and he'll be collecting his award on February 8th, alongside stablemate Hosokawa who was the month's MVP .

Now ranked by the OPBF Yamauchi is clearly on his way to his first title fight, but the fighter himself has admitted that he doesn't need to be rushed. Instead he's likely to have one or two building fights this year before getting a title shot, likely towards the back end of the year as Kadoebi look to turn him into a star.

We're expecting to see Yamauchi return to the ring on May 17th at the Korakuen Hall, in an 8 rounder, with the bout acting as the chief support for the Japanese Light Welterweight title fight between Valentine Hosokawa and Destino Japan. His opponent for that bout hasn't yet been announced, but the talk is that it could be another notable test to help prepare him for a title bout later in the year.