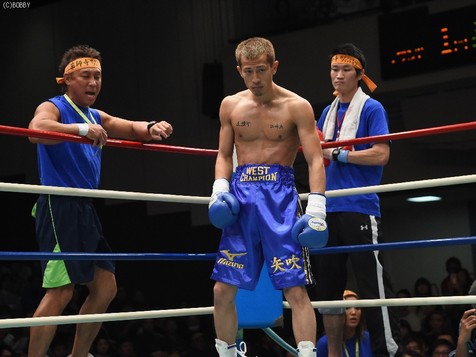 The lower weight classes are full of interesting fighters, ranging from charismatic journeymen to fast rising contenders, and everything in between. Some might suggest that the little can't puncher but that's often a fallacy and there are some really brutal punchers in the lower weight classes, just like there is in the higher weights. One of the most powerful punching prospects rising through the ranks at Flyweight is 26 year old Masamichi Yabuki (7-2, 7), who will be fighting later this month whilst looking for his second win over a world ranked opponent.

Yabuki, unlike many Japanese prospects, wasn't an accomplished amateur, going 16-5 (9) in the unpaid ranks. Not only was his amateur career short but it also didn't see him secure any sort of notable achievements. It's also worth nothing that he's not signed to a big name gym. Instead he fights out of the Midori Boxing Gym in Nagoya. It's not a poor gym, by any stretch of the imagination, but it's not one of the biggest ones in the region and has only developed 2 champions in it's history.

Due to his limited amateur success Yabuki began his career fighting in 4 round bouts as part of the Rookie of the Year in 2016 as a Flyweight. Despite his rookie status it was clear that he had brutal power straight away, stopping Shohei Horii in 149 seconds in March 2016. His second bout would last just 132 seconds, with Kiyoshi Nakamura the victim of Yabuki's power.

With those two wins Yabuki would reach the 2016 West Japan Rookie of the Year final in November, in part due to a walk over bout in September against Daisuke Uchiyama. In the final he would face Ryosuke Nasu. On paper Nasu was a massive step up in class from Horii and Nakamura, having a record of 6-1-2 (1) at the time and having never been stopped. Sadly for Nasu his history didn't help against Yabuki with the heavy handed Yabuki needing just 64 seconds to stop Nasu, with the towel coming in to save Nasu who had been completely unable to handle the power of Yabuki. With the win Yabuki not only claimed the West Japan Rookie of the Year crown but was also awarded the MVP for the West Japan.