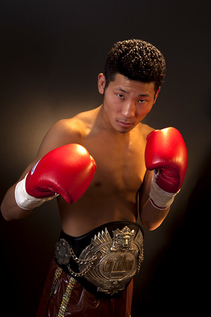 Courtesy of http://www.celes-gym.com
One of the best things about young fighters from the East is that they aren't protected for years. The Japanese promoters seem to have a sink or swim mentality at their core and whilst it can seem harsh on the fighters from an outside view point it does seem to work for many fighters who seem to see it as an honourable thing and the right way to approach their boxing career. After all what is the point in having dreams if you're not willing to take the steps to reach them? What is the point in competing if you don't want a challenge? What is the point in boxing if not to test yourself against fellow fighters?

One fighter who has had to suffer an early career loss though hasn't let it really effect his career is Japanese Bantamweight Ryosuke Iwasa (22-2, 14) [弘樹椎野]  who many are tipping as a nailed on future world champion and a man with so much potential that the loss on his record doesn't matter. It's not the "0" that makes a fighter but his skills, achievements and challenges.

Like many young Japanese fighters over the past few years, such as Naoya Inoue and Kazuto Ioka, Iwasa was always going to be fast tracked. He was, like Ioka and Inoue, a stand out amateur and one of the few fighters to achieve the "Triple Crown" of winning High School, Interscholastic and National Festival titles in the unpaid ranks. That achievement, and his amateur record of 60-6 (42) said it all, Iwasa was an amateur stud.

Having established himself as a force, domestically, on the amateur stage Iwasa seemed to know that his future was in the professional ranks rather than staying amateur. Despite being just 18 he had made his decision to take off the headgear and the vests.

Iwasa made his debut on August 2nd 2008, more than 4 months before his 19th birthday. As with many highly touted amateurs in Japan Iwasa jumped straight into a 6 rounder and managed to stop Shinya Takahashi in 5 rounds. Takahashi had never previously been stopped in 9 bouts and so this was a solid statement from the talented and young Iwasa.

Just 2 months after Iwasa's debut he managed to record his second victory as he over-came Mexican Edgar Allende via a 6 round decision.