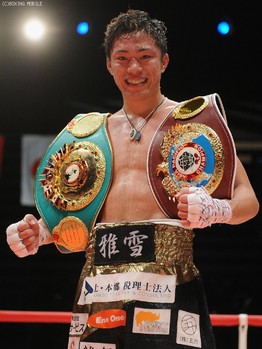 Over the last decade or so Japanese fighters have been a fixture in the world title scene at Super Featherweight. The country have given us top fighters like Takashi Uchiyama and Takashi Miura, who were both world champions at the same time holding the WBA and WBC titles respectively, Kenichi Ogawa, who at the time of writing holds the IBF title, and Daiki Kaneko, who challenged Uchiyama.

All of those 4 fighters were heavy handed and tough fighters, who relied somewhat on physical traits than boxing skills and movement, however the heir apparently is much more of a boxer-mover than a brawler or a puncher.

That man is Masayuki Ito (23-1-1, 12) who has gone under the radar despite climbing up the rankings and having some really notable success in the regional title scene. In fact Ito unified the WBO Asia Pacific and OPBF titles, and has gone on an excellent run since suffering his sole more than 3 years ago.

The Tokyo fighter didn't have much of an amateur career or have any major success in the unpaid ranks. Instead his career really began at the age of 18, when he made his professional debut in May 2009. Sadly it would be almost a year later that Ito would fight for a second time, as a road traffic accident kept him out of the ring. His return was a successful one and he would move to 4-0 (2) by the end of 2010. His first set back came the following year, when he was held to a draw by the hard hitting Tsuyoshi Tameda, himself now a man looking at getting into the Japanese title mix.

In 2012 Ito competed in the Rookie of the Year, as he had done the previous year when he'd been eliminated with the draw with Tameda, and really found his footing in the sport. He stopped Kyohei Tsunashima in his first round bout, took a decision over Masaru Sueyoshi in his second round bout and progressed to the all Japan final with wins against Kazuhiro Miura and Kazuyuki Yamao. In the final Ito would meet future Japanese Featherweight champion Kosuke Saka. Against Saka Ito really showed his grit to over-come the heavy handed Osakan, who entered the bout 6-0 (5).

Having claimed the 2012 Featherweight Rookie of Year the future was bright for Ito, but he didn't need to be rushed and was instead kept busy in 2013. That year saw him beat Taiki Minamoto in his second bout of the year and claim the WBC Youth Lightweight title just 2 months later, as he stopped Jeffrey Arienza of the Philippines in 10 rounds. Those wins really helped with proving Ito's stamina's, skills and heart and further solidified him as a rising prospect.
Ito went from prospect to domestic contender the following year when he scored wins against Kazuya Nakano, Masao Nakamura and Ryan Sermona. The win over Nakamura saw Ito score a win over a world ranked opponent, and for the first time he was beginning to edge towards a world ranking of his own. The win over Sermona further pushed his claim towards an OPBF title fight.

Having progressed his record to 16-0-1 (7) Ito got his second title bout, as he took on Rikki Naito for the Japanese Super Featherweight title. Sadly for Ito he would come up just short against the then champion, losing a razor thin majority decision with scores of 97-94, 96-95 and 95-95 giving Naito the win. Just 6 months later Ito would return to the ring, and fight against Dai Iwai for the Vacant OPBF Super Featherweight title, which had been vacated by Jomthong Chuwatana. Against Iwai a confident looking Ito shined, out boxing and then stopping Iwai to claim the title and put the Naito defeat behind him.

As the OPBF champion Ito would defend the title just 4 months after winning it, defeating Shingo Eto, before securing his second defense in the summer of 2016, when he stopped the tough and game Ernie Sanchez. To end 2016 the talented Ito out boxed the teak tough Takuya Watanabe to unify the OPBF title with the WBO Asia Pacific belt. That win put Ito well into the WBO rankings, with his ranking further boosted with a defense of the WBO Asia Pacific in April 2017,when he dominated Lorenzo Villanueva. Since that win he has stayed busy with stoppage wins over Glenn Enterina and Vergil Puton as he's continued to pursue a world title fight.

At the time of writing Ito is ranked #2 by the WBO, #7 by the WBC, #8 by the IBF and #9 by the WBA and is very much in the mix for a world title fight, with one expected later this year.

In the ring Ito is a really smart boxer-mover. He has intelligent foot work, and controls the distance well, before finding his range and boxing behind his jab. Despite being a relatively pure boxer in the early stages of his career he has began to show more power in recent years, stopping his last 3 foes and 5 of his last 7. Like many fighters his record has actually improved as his career has gone on, and 3 of his early victories have come against fighters who have gone on to claim national titles, with Sueyoshi, Saka and Minamoto all winning Japanese titles.

Although still not a puncher Ito does seem to have respectable power and is a fighter who looks like he's ready to fight for a world title. No one would favour him against the truly elite level fighters in the division but he would likely be able to hold his own, at worst, with the other leading contenders, like Christopher Diaz, Billy Dib, Tevin Farmer and Evgeny Chuprakov.