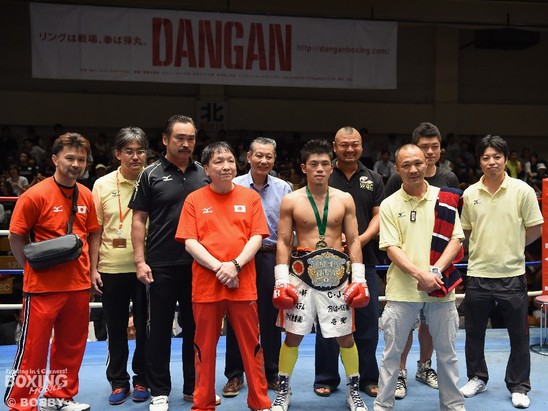 One of the many exciting fighters coming through the Japanese domestic scene at the moment Tsuyoshi Tameda (18-3-2, 16) [溜田剛士], who has become a bit of a favourite of ours on the Japanese domestic scene. He's certainly a long way from world class, despite facing a former world champion back in 2016, but at domestic level he's a monster with vicious power, an exciting style and a growing fan base.

Tameda got into boxing due to his father knowing Yoshinori Nishizawa and would turn to boxing whilst a youngster. Despite picking up the sport rather young he didn't really have much of an amateur career, instead competing at Karate before entering the legendary Yonekura gym at a very young age and turning professional as a boxer soon afterwards.

The Japanese youngster would make his debut at the Korakuen Hall on January 27th 2011, when Tameda was just 17. Despite being just a kid Tameda made an immediate impact on the sport, blasting out Koki Yoshida in 70 seconds.

Tameda's debut would be followed by the youngster entering the 2011 Rookie of the Year as a Featherweight. His first opponent in the Rookie tournament was Arata Yoshimoto, who lasted just 23 seconds with Tameda in April. His second Rookie of the Year opponent was Katsuya Sato, who became Tameda's third straight opening round victim, lasting 81 seconds in May. That sort of impressive start caught the eye of some fans who were starting to get excited about the rising teenage puncher. The stoppage run would however come to an end in August, when Takumi Takahashi managed to survive the 4 round distance with Tameda, losing the decision.
​
Interestingly Tameda's 5th professional bout, still in the Rookie of the Year, saw him fight to a draw with current world champion Masayuki Ito. Going in both men were 4-0, both were youngsters with Ito being 20 and Tameda being 18, and both fought on very even terms with the judges scoring the bout 38-37, 38-38 and 37-38 for a split decision draw. Despite the draw Tameda progressed to the next round, where he was narrowly beaten by Joji Senba , who would lose in the All-Japan Rookie of the year final to Ryuto Kyoguchi the older brother of Hiroto Kyoguchi.