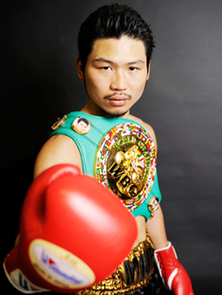 When we talk about fighters who impressed up in 2013 very, very few stood out as much as Super Featherweight Takashi Miura (30-3-2, 23)  [三浦 隆司] who really made a name for himself with a trio of major victories over Mexican foes, victories that have seen some dubbing him the new "Mexecutioner".

Despite 2013 being Miura's break out year it wasn't really a shock to hardcore fans who had been following the hard hitter over his career. In fact if anything the success Miura had in 2013 was long over-due and just confirmed what many already knew, he was a world class fighter with a lot heart, destructive power and ever improving skills.

Whilst it's fair to say that 2013 was a career year Miura has actually been on the boxing scene for well over a decade and that those in the know knew just how much potential Miura had to be not just a "world champion" but also one of the most must watch fighters in world boxing.

Miura began his boxing journey, like many fighters, in the unpaid ranks. It was there that many on the Japanese domestic scene started to take note of the hammer fisted fighter who, although successful as an amateur, had a very pro-ready style. He enjoyed a fight and had genuinely thunderous power. There wasn't many fighters in the amateurs who would willingly choose to go toe-to-toe with a young Miura and his power was the reason.

Although Miura had a pro-ready style he still managed to do very well in the amateurs winning 34 of 40 amateur contests and stopping 22 of his opponents. Those victories also helped Miura to claim a title as the national sports festival in 2002.