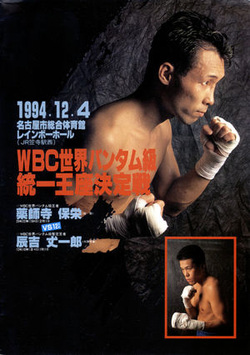 Courtesy of Boxrec.com
In December 1994 Japanese boxing fans were treat to a genuinely memorable battle for WBC Bantamweight title as the popular Joichiro Tatsuyoshi (10-1-1, 8), the then interim champion challenged Yasuei Yakushiji (22-2-1, 16) for the full version of the title. The bout, the first ever "world title unification" (we use that term loosely) bout in Japan was major news and a huge event.

The back story to the bout was a tale worth remember before getting on to the bout it's self.

Tatsuyoshi had been thought of as a great in the making. He had run up an 18-1 amateur record before turning professional aged just 19. He had raced through the professional ranks winning the Japanese national title in his 4th bout and the WBC Bantamweight world title in just his 8th bout.

Although Tatsuyoshi had lost the world title in his first defense (TKO9 loss to Victor Rabanales) he had climbed back up the rankings and less than 2 years after the loss to Rabanales he had found himself in with a chance of fighting Korean Jung-Il Byun to regain the title.

Sadly for Tatsuyoshi he had been forced to pull out of a bout with Jung-Il due to a detached retina and in his place Yakushiji had been given the chance. Yakushiji went on to defeat the Korean and claim the world title why Tatsuyoshi had been left with an interim title.

By the time the two men were able to fight Yakushiji had already defended the belt twice defeating Josefino Suarez (KO10) and Jung-Il (TKO11). This was in stark contrast Tatsuyoshi who had fought just once in 17 months, stopping Suarez in 3 rounds.

Despite being the challenger, with less experience and 2 notable injuries (both eyes had suffered detached retinas) Tatsuyoshi was favoured going in.