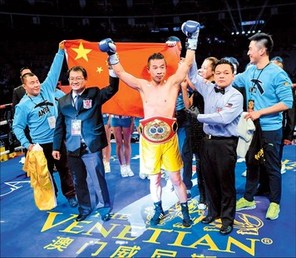 In the last few years we've seen a notable rise in Chinese boxing lead by the likes of Xiong Zhao Zhong and, more recently, Zou Shiming. We won't pretend that China is a boxing force, yet, but the country quickly appears to be developing some talent of note and the likes of Rex Tso and Kuok Kun Ng both appear to be very promising young prospects.

Another of the notable Chinese fighters is the highly exciting Ik Yang (19-2-0-1, 14). Yang combines power and excitement with the style that can capture an audience on both sides of the world and is, potentially, the most “TV friendly” of the emerging Chinese fighters. Unlike many of the Chinese fighters however he didn't begin his career in China and he wasn't one of the fighters to emerge in the shadows of Zou Shiming. Instead Yang was a fighter made in Korea rising through the Korean ranks just as the domestic Korean scene was beginning to collapse.

Yang was born in 1985 in Da Lian, China and was born with the lane Yang Lian Hui, though has fought much of his career as either Yang YT or Ik Yang with the latter of those names being the one that he is now known as, and that one that many will have seen him use in his bouts from Macau and Shanghai in recent times.

Yang is, of course, a fighter who has come to the attention of fans in recent times. As mentioned above however he began his career in South Korea way back in 2007. Back then the 22 year old Yang was a nobody. He had not turned professional with a major amateur pedigree and he was not some wrapped up star with a big name and ego. Instead Yang was a fighter, and a man looking to prove himself one way or another.