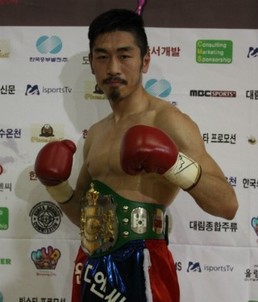 It's fair to say that in the last 10 years or so Korean boxing has genuinely struggled to remain relevant. In the past the country gave us greats such as Jung-Koo Chang, Ki-Soo Kim, Sung-Kil Moon, Chan-Hee Park, Soo-Hwan Hong and Myung-Woo Yuh though since the retirement of In Jin Chi in 2006 it's fair to say that South Korea have been with out any sort of world beater.

Sure Ji Hoon Kim has fought at world level though he came up incredibly short when he fought Miguel Vazquez for the IBF Lightweight title back in 2010. Ji Hoon Kim, for all his excitement will be unlikely to ever claim a world title due to his limitations and whilst we'll always support him we do so knowing that he's been found out at world level.

Ji Hoon Kim aside it's actually hard to think of a professional Korean boxer with much promise, though one man who stands out right now is the world ranked Light Welterweight Min-Wook Kim (16-1, 12) [김민욱] who has proven himself to be destructive and a fighter who is genuinely on the rise through the ranks.

The 27 year old Kim was based in Seoul early in his career, which began in 2010 following an amateur career that saw him competing on the international stage, though is now based in the US and trains at the Ponce De Leon gym.

Sadly for Kim his debut didn't get off to a great start as he was ridiculously matched with Taek-Min Kim, a former national champion who had a record of 10-3. Kim put up a brave effort before being stopped in the 5th of a scheduled 8 rounds by a man who went on to claim the PABA Super Featherweight title in just his next fight.

Since losing on his debut Kim has been impressively building a reputation for himself as an explosive puncher with surprising speed. It's been that combination of power and speed that has seen him seemingly come from nowhere to become one of South Korea's most promising young fighters
Kim would bounce back from his debut loss with a pair of early finishes before being taken 8 rounds by tough veteran Yang-Soo Sung. Although Kim was less than impressive against Sung it was obvious that his handlers weren't going to feed him easy bouts to build a record on and this method of pushing Kim hard and fast appears to have paid off in recent bouts as Kim has become more and more impressive.

Having advanced his record to 5-1 (3) Kim would then face the unbeaten Hyuk-Jin Go (then 7-0, 5). This was expected to be a tough tests for both men but Kim swiftly blasted out Go stopping him after 67 seconds of the second round.This result made many who hadn't been following Kim sit up and take notice though his reputation just grew and grew through the year as he claimed the OPBF belt blasting out the then champion Romeo Jakosalem in 2 rounds.

Kim would defend the OPBF title 4 times stopping Pan-Soo Kim (TKO2) and Dan Nazareno Jr (TKO2) before scoring a huge decision victory over former Japanese national champion Shinya Iwabuchi and then stopping Valentine Hosokawa (TKO11). For us it's fair to say that the victory over Iwabuchi was not only the most impressive victory of Kim's career but it was also 2 other milestones, it was not only the first time Kim had fought outside of his native Korea but also his first 12 round decision win.

Those wins were notable enough for Kim to receive a #9 world by the WBC at Light Welterweight, and at the time he was the only Korean to hold a world ranking. Sadly however he then took more than a year out of the ring before resurfacing in Mexico where he scored an opening round victory over the limited Lizandro De los Santos. That win, in April 2015, appears to be the beginning of a new chapter in Kim's career which will see him fighting in the west in an attempt to recapture his early career momentum.

In Kim's second bout since his return to the ring he made his US debut, stopping Luis Alberto Pelayo in Texas. Although the fight was off-TV he did manage to capture the attention of some of the fans in attendance. Since then he has scored 3 more wins in the US, scoring a 5th round KO against Erick Daniel Martinez in January this year, an 8 round decision over Alvaro Ortiz and more impressively an opening round blitz against Louis Cruz, who was down 3 times in the opening round.

Whilst many won't have seen too much of Kim what we can safely say about him is that he's got power, he's fun to watch, he's got a notable following back home in Seoul and better yet, he may be the fighter to revitalise the dormant South Korean boxing scene.

(Video below is courtesy of J.M. Kim)