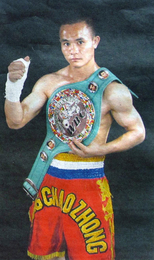 Courtesy of boxrec.com
When people talk about boxing "countries" China is rarely mentioned and that's because through out the history of the sport it's never been a major player. As with the communist countries in the mid late of the 20th century however it appears a sleeping giant is beginning to wake.

Whilst many would refer to 2-time Olympic Gold medal winner Zou Shiming as the leading force in Chinese boxing, others would actually state that that title belongs to Xiong Zhao Zhong (or Xiong Chao Zhong) who is by far and away the most accomplished professional boxer in China.

The 33 year Zhong holds an impressive professional record of 26-7-1 (14) is a fighter, who like Shiming, has secured his place in the record books having become the first ever man from China to hold a world title. He recorded this feat back in November 2012 when he overcame Mexican Javier Martinez Resendiz for the WBC Minimumweight title.

Prior to taking the WBC Minimumweight title Zhong had been a bit of anomaly in China where professional boxing is still scarce. He had made his professional debut in his home city of Kunming in 2006 and had actually drawn with Yu Ling Feng on that occasion.

Unfortunately for Zhong his title reign didn't last very long with him losing his title in his first defense to Filipino journeyman Julius Alcos. Despite the loss it wasn't long until Zhong was being given bigger and better opportunities, in fact just 2 fights after the loss to Alcos he was selected as the challenger to Daisuke Naito, then then WBC Flyweight champion.