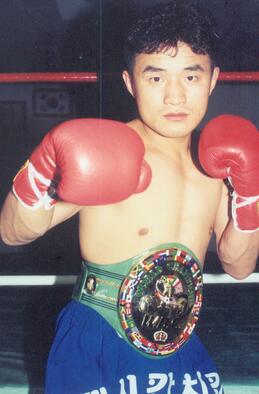 When we think about the most iconic images from Olympic boxing few have ever stood the test of time as that of the Korean boxer crying in the ring after a loss at 1988 Seoul Olympics. He was there, protesting his loss that long that the venue turned out the lights. That is the ever lasting image of Korean fighter Byun Jung Il (10-2, 4), who following that event actually went on to have a short, but very notable, professional career.

Born in December 1966 Byun would get a reputation as a very talented young amateur. Although specifics are unclear Korean sources report that he won not only a Korean national title but also "various international competitions"* whilst fighting as a skileld southpaw. His results from the amateurs lead him to go to the Olympics, in his home town of Seoul in 1988.

In his first bout at the Olympics Byun would defeat Frenchman Jean-Marc Augustin in a Bantamweight bout. In his second bout at the Olympics Byun would face off with Bulgarian foe Alexander Hristov. The bout saw Byun being twice be deducted a point by referee Keith Waker, for use of the head, and eventually losing the bout 4-1. This result angered not only Byun but also the Korean officials, who stormed the ring and assaulted the referee in some of the most disgusting scenes seen in Olympic boxing history. They began a riot of sorts whilst Byun began a sit in protest.