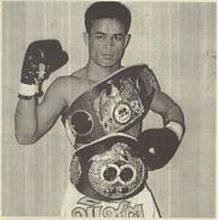 Courtesy of Boxrec.com
Through out the course of history only a handful of champions have retired undefeated. Arguably the least well known is former IBF Flyweight champion Pichit Sithbanprachan (24-0, 18) who held the IBF title for 2 years in the 1990's with out getting much recognition from the boxing community.

The fighter from Chaiyaphum, one of the north eastern provinces of Thailand, seemed to burst out of nowhere in 1992 when he defeated the experienced and highly regarded Alfonso Blanco in a genuinely big upset.

Prior to becoming a world champion Sithbanprachan has a some what mysterious background. The commentators on his bout with Blanco seemed to doubt his age (which they mentioned was "24") and with good reason as some sources list him as being born in 1966 whilst others suggest 1968. This sadly was one of many unanswered questions of the Thai.

Despite the questions surrounding his early days what we do know is that Sithbanprachan made his debut in the late 1980's against Taksin Muangsurin in the famous Lumpinee Boxing Stadium. Although the stadium is famed for it's Muay Thai tournaments, which are amongst the most prestigious in the sport it is also one of the best indoor boxing arenas in Thailand.