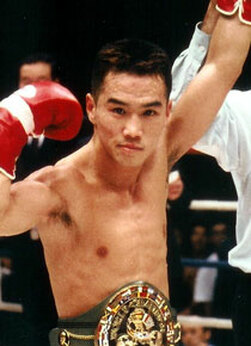 The Super Flyweight division has been one of the most notable in Japan in recent years, with fighters like Nobuo Nashiro, Kohei Kono, Yota Sato, Daiki Kameda and Naoya Inoue all making a mark there. Back in the 1990's there was also a series of very notable Japanese fighters picking up world titles at the weight. They include the likes of Katsuya Onizuka, Satoshi Iida , Hideki Todaka and Hiroshi Kawashima (20-3-1, 14), the latter of which is the focus of this profile.

Born in Tokushima City in 1970 Hiroshi Kawashima was the younger brother of Shinobu Kawashima, who was 5 years older than Hiroshi. Shinobu had made his professional debut in 1983 and would go on to fight Soon Chun Kwon for the IBF Flyweight title in 1985, losing by knockout to the Korea, before ending his carer with a loss to Satoshi Shingaki.

Given his older brother's career, despite how short it was, it was little surprise to see Hiroshi also take up the sport, and he also showed a lot of early promise whilst fighting as an amateur. He would go 27-3 (15) in the unpaid ranks, and win an inter-high school tournament in the late 1980's, beating Takato Toguchi, who would later fight as Puma Toguchi, in his final bout of the tournament.