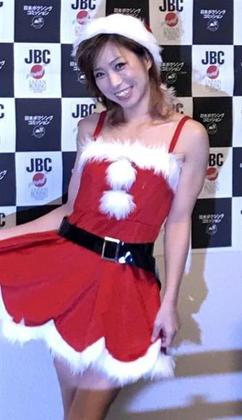 The female boxing scene is picking globally, with golden girls like Nicholas Adams and Claressa Shields both getting a lot of international attention, along with Irish superstar Katie Taylor, and the rise of Mikaela Mayer also seems set to be something rather significant with US TV already getting behind her.

Although female boxing is getting bigger in the Western world it's been a relative success so far in Mexico, Argentina and Japan, with all three countries producing some very notable fighters. Among the Japanese fighters who have made a name for themselves is Yuko Kuroki (18-5-1, 8) [黒木優子], who has both the talent and the looks to be a star.

The 27 year old from Fukuoka has been compared to former star Tomomi Takano, with both being very photogenic fighters, but unlike Takano we've seen Kuroki deliver in the ring and the former WBC female Minimumweight champion is a real talent between the ropes. Not only is she a talent but she is also committed to the sport and despite flirting with some out of the ring activity she hasn't ignored the sport to follow other careers, something that seemed to befall Takano.

Although now dedicated to boxing Kuroki's first sporting love was skiing, something she started at a very young age. She was encouraged to box in junior high school, to help with her overall fitness, and seemed to quickly fall in love with the sport.

Kuroki would pass her pro-test bout in April 2008 and would debut in December. Sadly for the then 17 year old she would lose on debut, suffering a narrow decision defeat to Kumiko Nishida. That was one of two early career defeats for Kuroki, who would also suffer a narrow defeat in her third professional bout, against future world champion Naoko Shibata.

Having a record of 1-2 after 3 fights it would have been easy for Kuroki to write off boxing and move to something else. Instead she stuck with boxing, and would score her first stoppage win in December 2009 when she defeated Korean based Canadian Amy Berezowski in 2 rounds. That began an impressive winning run for Kuroki that would see her advance her record to 9-2 (5) and claim her first title, the WBC Youth Female Atomweight title.

The impressive run of Kuroki would see her climb up the world rankings and her reward was a showdown with the then WBA female Minimumweight champion Etsuko Tada. Tada, then 11-0-2 (2), was making her 9th defense of the title that she had won back in 2009. Despite a game effort from Kuroki it was a clear win for Tada over the 10 round distance, with the champion's higher level of experience being a part of the difference between the two. That set back was unfortunately the start of a poor period of results for Kuroki, who would fight to a decision with Saemi Hanagata at Atomweight, then fight Hanagata to a draw at Minimumweight, in an OPBF female title bout.