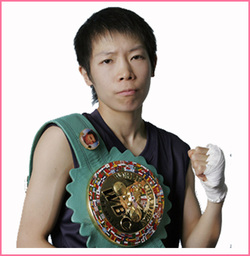 Courtesy of http://aokiboxing.com
When it comes to top female fighters it's incredibly difficult to ignore WBC Atomweight champion Momo Koseki (19-2-1, 6) who has shown all the traits any great fighter can have. She's tough as old boots, good on the outside and can control a tear up like so few others. The only thing that she seems to lack is genuine KO power but that's very rarely found in the lower divisions regardless of gender.

Aged 31 Koseki has been the dominant Atomweight for the better part of a decade and is arguably the greatest fighter the division has ever seen. At 31 though she is getting on for a fighter in the lowest division of professional female boxing and we wouldn't expect her to continue her domination for more than a year or two. If one opponent will defeat her it'll be father time.

Koseki was attracted to the sport at an early age from watching the excellent, and highly forgotten, Hiroshi Kawashima defending his WBC Super Flyweight title in the 1990's. From then on it seems that boxing was something she wanted to take part in and whilst female boxing wasn't big in Japan at the time it was something Koseki decided to try her hand at.

Although female boxing wasn't big at the time it seemed set to take off in Japan and in 2003 the country held the first "All Japan Women's Amateur Boxing Championships" Koseki was me of the fighters involved. Whilst the tournament was embryonic to say the least it was a championship that gave us some fantastic fighters, not just Koseki but also the likes of Naoko Fujioka and Etsuko Tada.

In the final 2003 "All Japan Women's Amateur Boxing Championships" Koseki showed her skill as she took won her division beating Etsuko Tada in the final. This result saw her moved claim a place in the 2003 Asian Women's Championships in Hisar, India. Unfortunately for Koseki she ran into K.A.A.Dilrukshi in the opening round and was clearly defeated by a score of 23-15. We believe this was Koseki's first amateur defeat.

Koseki claimed her second national title by winning the Japanese Amateur Champions in 2004 though was unfortunately beaten in 2005 by Tada in the first round and then beaten in 2006 by Yuki Yashiro, the younger sister of Yoshimitsu Yashiro. Thankfully for Koseki she did manage to claim a third national amateur title in 2007 when she looked virtually unbeatable.

After the 2007 that Koseki had she was hoping that female boxing would have been accepted in to the 2008 Beijing Olympics. Unfortunately it wasn't and instead of continuing on her amateur journey she decided to turn professional. We believe leaving behind a 22-4 amateur record.