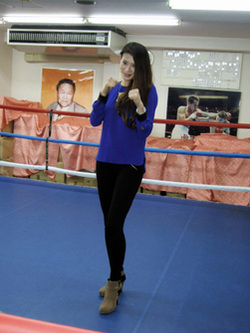 Courtesy of http://i.daily.jp/
We know, from sitting on forums and engaging fans across a wide array of mediums, that plenty of boxing fans don't care for female boxing. It's a shame that some fans do live in a world where they claim they want equality but yet don't like the idea of women fighting. That it however their choice and they don't have the power to deny fighters of any gender to get in the ring, don the gloves and partake in the noble art.

Thankfully some female fighters know that they are a valuable part of the boxing landscape and can draw extra attention to the sport, draw in a larger and more varied fan base and help the sport to grow. One such fight is Tomomi Takano (7-1, 5), a gorgeous, charismatic woman from Tokyo who, despite only being a novice, seems to be one of the biggest draws in Japanese boxing right now and is potentially the sports next female star.

If you saw Tomomi on the street, or in a photograph or even in a magazine you wouldn't think she was a fighter. She's attractive, tall, slim and leggy. You would almost certainly jump to the conclusion that she was either a singer, an actress or a model. She has those magnetic looks that draw you in, a smile that's worth a million dollars and the natural charm that is so rare that it's effectively printing money for it's self.

In Tomomi we don't have a normal female boxer, we have someone very special.

Although originally known as a model Tomomi has made the move from the cat walk to the boxing ring with ease. She's not, at any point in her career, looked like a part time fighter. She's always looked like someone who is committed to becoming a champion and not relying on her looks to get her places in this sport. This is probably what has helped so much in her career already. Many other pretty ladies who get in to boxing think it's a game for Tomomi though it's a career and one that she knows has the potential to make her into a star.

As mentioned above, Tomomi was originally known as a model. She was in various major modelling competitions including "Miss Earth" and an "Asian Super Model" contest. Had she wished to stay with modelling it wouldn't have shocked us to see her on billboards around Japan and maybe even the occasional advert in the West.

Thankfully though Tomomi was a fighter at heart. She had learned to kickbox for several years in high school and although she wasn't a star she had shown a genuine fondness to combat sport.

Tomomi's love of combat sports was reignited a few years ago courtesy of friend, and current OPBF Featherweight champion, Hisashi Amagasa. Amagasa managed to inspire Tomomi to try her hand at boxing and she attempted to qualify for the 2012 Olympic games. Her dream, like most amateur boxers was to win an Olympic gold medal

Unfortunately for Tomomi she didn't have enough time to develop the skills and experience to qualify for the London games never mind winning a medal there. Despite the setback it was obvious that boxing bug wasn't going to leave her alone and she was advised to try and turn professional.