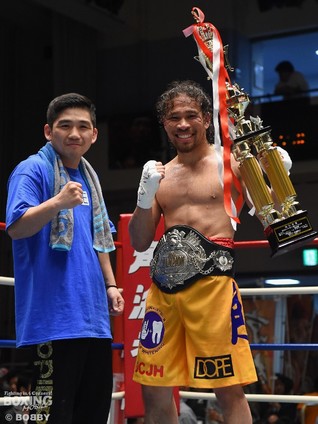 Japanese boxing has a lot of unheralded fighters who have achieved things domestically but lack in terms of international recognition. Whilst that can be understandable sometimes it's a bit unfair, to both the fighters and the fans. It can mean the fighter doesn't get the attention they deserve and it means fans can end up missing out on some thrilling action and some of the best wars taking place in the sport.

One such over-looked fighter is Japanese Light Welterweight champion Valentine Hosokawa (23-6-3, 10), who has been in some amazing fights through his 32 fight career. The end might be nigh for the Kadoebi fighter, who at the age of 37 is probably heading towards the end of his career, but for now he is one of the most under-rated and most exciting fighters currently fighting in the Land of the Rising Sun.

Hosokawa didn't set off to become a boxer, instead it was Karate and then MMA that had his attention, with the hope of competing in PRIDE or K-1. He would however end up going to the Miyata Gym, and would become hooked on boxing from there. That was despite some troubling moments in his first sparring session which saw the youngster becoming gassed after around 30 seconds. At the Miyata gym it seemed like Hosokawa instantly fell in love with boxing.

In 2006, at the age of 25, Hosokawa made his professional debut, fighting just above the Featherweight limit. On debut he would fight to a 4 round draw with Yoshinori Kanzaki, with the judges struggling to split the two men. Just 2 months later he would return to the ring, this time as a Lightweight, and score a lighting quick victory, stopping Kosuke Kobayashi in just 14 seconds. Hosokawa would follow up his first win with two more, taking decisions over Tatsunari Yasuda and Akihiro Ito, to move to 3-0-1 (1).

Sadly in 2007 Hosokawa would lose his unbeaten status as future world title challenger Akihiro Kondo took a 4 round decision over Hosokawa. The loss was a set back but it only seemed to spur Hosokawa on and in 2008 he had a stellar, and busy, year going 4-0-2 (2) whilst claiming the All Japan Lightweight Rookie of the year. Through the year he would defeat Spicy Matsushita, fight to a 5 round draw with Koichi Aso and defeat Hideaki Ura in the All Japan final to make it clear that he was a fighter to follow, with his momentum and confidence both growing rapidly.

In 2009 Hosokawa build on his success from the previous year and went 3-0 (2) whilst moving in to 8 round contests. With those wins Hosokawa advanced his record to 10-1-3 (5) going into 2010, sadly however he would suffer his second loss in February that year when Kuninobu Shimamura took a razor thin split decision over Hosokawa. That bout, over 6 rounds, lead to Hosokawa flirting with the Light Welterweight division, scoring a win over Daichi Sakoda at 140lbs in May, before dropping back to Lightweight and picking up 2 more wins.